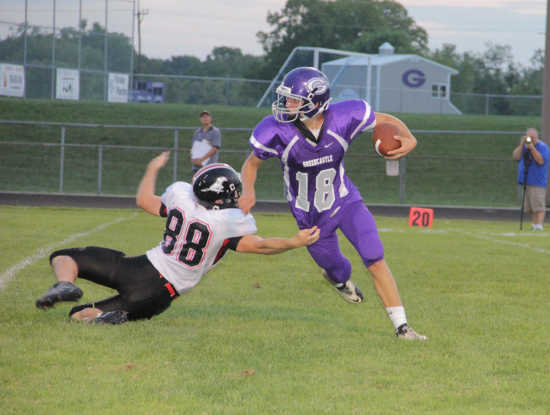 Fans came away from Greencastle's gridiron contest against Edgewood seeing yellow. During the course of the Tiger Cubs' 21-0 win, the field was littered with yellow handkerchiefs numerous times resulting in a disjointing game that didn't allow either squad to fall into a groove in the second half.

Greencastle struggled against penalties throughout the night, but head coach Josh Buis thought his squad played solid and didn't allow the Mustangs to gain any kind of an edge.

"I think our defense has been extremely constant," Buis said. "There were times tonight that we bended a little bit, but we didn't break. And I told them this week in practice that Edgewood has enough good athletes to where they're going to make us bend a little bit.

"But when push comes to shove, we've got to keep them out and our defense did an extremely good job this week of doing that."

The flags flew almost literally from the opening whistle, but the Tiger Cubs were able to overcome the onslaught penalties and get on the board quickly.

Following a stalled first possession, Greencastle went to the air and found paydirt. Quarterback Nick Gilliam hooked up with Mac Shuee twice for 65 yards in a drive that spanned four plays and netted 77 yards. The duo's second connection resulted in the games first touchdown with 4:43 remaining in the opening quarter.

Greencastle scored again with 8:48 to go in the first half when Alec Pettit bulldozed his way in from four yards out. A Sedrick Weinschenk point after made it 14-0 in favor of the Tiger Cubs.

Things got sketchy for Greencastle on its next possession as Gilliam hit his hand on a helmet while throwing and backup Tyler Scott made came off the bench. The duo switched spots earlier on a similar play, but when Gilliam returned and his first throw was anything but a tight spiral, Scott was calling the shots for the rest of the game.

For those worried about having a backup quarterback run the show, Scott put those worries to rest in quick fashion.

On his first full position as signal caller, Scott led the Tiger Cubs on an 81-yard drive that was capped by a 50-yard touchdown strike to Cody Pohlar with 2:22 left before halftime.

Scott followed that up by intercepting Edgewood quarterback Nic Brown on his first passing attempt to give GHS possession once again. The Tiger Cubs ran out the clock and took a 21-0 lead into the half.

Normally a switch at quarterback during a game would give a coach the jitters, but Buis acknowledged his faith in his backup QB and also praised his defensive efforts.

"Our offensive is continuing to improve. What was nice tonight was to see -- Nick Gilliam got a banged up thumb a little bit and our backup quarterback is pretty good. He's an extremely talented cover corner, so it's nice to have some depth at that position," Buis said.

The main action fans got to enjoy in the second half was more yellow flags flying on offense, defense and even during a timeout. Greencastle wasn't able to find the endzone for the remainder of the game, but its 21-point advantage was all it would need to secure its third win of the season.

Buis praised his offensive line after its starting quarterback was knocked out of the game, especially in the second half.

"When Gilliam got hit, it was someone who we didn't have a hat for," Buis said. "That kid (Gilliam) is pretty confident in the pocket and wants to squeeze it and take as many shots as he can down field. You want a quarterback with a little swagger.

"Our offensive line, I challenged them at halftime and I thought they came out and took the game over in the second half and ran the football."

The Tiger Cubs will hit the road again next week traveling east to meet up with Indianapolis Arlington. Buis said it would be a contest his squad will need to be ready for, both physically and mentally.

"But to travel that far to a well-coached Indianapolis team is going to be fun. It's a new experience for us and we're excited about it," Buis added.

Gilliam passed for 139 yards, with Scott collecting 64 yards. Pettit led the Tiger Cubs ground attack with 113 yards rushing and a score, while Shuee led the team in receiving yards, collecting 139 yards and a touchdown.

Greencastle will take on Indianapolis Arlington Friday at 7 p.m.