He was born on Aug. 19, 1920 in Indianapolis and was the son of the late Charles Henry and Stella Bell (Black) White. 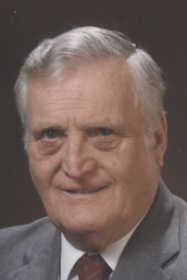 In addition to his first wife and parents he was also preceded in death by his sisters, Frances Berlin, Mary Naomi Shumaker, Laurette Berlin and Madge Griswold, and his brothers, Melvin White and James White.

He retired from IBM Corp. at Greencastle in 1983. He was also a licensed auctioneer.

He was a veteran of the U.S. Army, serving in Central Europe, The Ardennes and Rhineland during World War II.

Funeral services will be conducted at 11 a.m. Friday, Sept. 7 at the Whitaker Funeral Home, Cloverdale, with Bro. A. J. Cox officiating. Visitation will be 4-8 p.m. Thursday, Sept. 6 at the funeral home.

Interment will be in Mannan Cemetery with military honors.

Condolences may be sent to the family at: cds@whitakerfuneralhome.net.