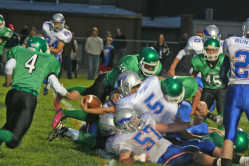 South Putnam kicker and backup running back Zane Yon (5) extends the ball in an attempt to cross the goal line in the second quarter Friday. Yon scored on the next play to put the Eagles up 48-0. The win moves South Putnam to 4-2 on the season, while the Clovers drop to 0-6.

CLOVERDALE -- Although the game was called at halftime as a storm front moved in, the final outcome was decided long before as South Putnam ran over Cloverdale to a 48-0 victory on Friday.

Sophomore Lucas Lorian led the way for the Eagles, carrying the ball 11 times for 179 yards and two touchdowns, including a 65-yard run midway through the second quarter.

Junior Wes Riner opened the scoring two minutes into the game, running the ball in from 19 yards out. He finished with nine carries for 117 yards and three scores.

"We got off to a strong start," SPHS coach Troy Burgess said. "Greencastle kind of took us out behind the woodshed last week and gave us a good ole' fashion butt-whooping and we needed to get out of the gate strong this week."

The Eagles (4-2), were shutout by Greencastle last week, 20-0, and Burgess said the defeat helped motivate his team all week in practice.

"Any time you go through one like that and, not just get beat on the scoreboard, but get beat -- they out physicalled us last week," he said. "That's the thing about football. It leaves a bad taste in your mouth for a whole week."

Cloverdale (0-6), took the opening kickoff and began trying to pass, hoping that spreading the field would help open things up for their power run game.

The Clovers could never get much momentum, running or passing and were forced to punt.

After a quick Wes Riner run made the game 6-0, Cloverdale running back Andrew Howard fumbled on the ensuing second down.

The ball was stripped by SPHS senior Ryan Chestnut, who then raced 23 yards into the end zone and put the Eagles up 13-0.

Zane Yon finished the scoring with a one-yard run on third and goal with less than two minutes remaining before halftime.

Cloverdale has been devastated by injuries throughout the season and by halftime Friday they were without another three starters.

"That's two quarters of experience that these young kids don't get," he said. "(But,) we've got to be very careful with playing guys both ways so we don't run them into the ground and get them hurt."

Coming into the season, the Cloverdale coaches hoped to have an offensive and defensive unit. Injuries have made that impossible.

Both coaches said they are starting to look ahead to week 10 when the postseason tournament begins.

"Our goal is to win football games," Butler said. "When we get to our tournament and we're playing teams in 1A (we'll be ready)."

Burgess had a similar stance.

"We had to come out and execute and we did," he said. "Hopefully we'll be playing our best football here in about three weeks when the tournament starts."