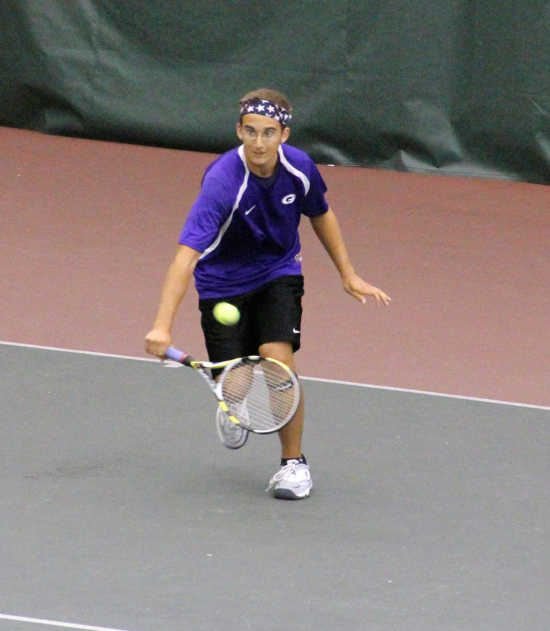 Greencastle No. 1 singles player Landon Miller won 6-0, 6-2 and will advance to the Crawfordsville individual sectional in Crawfordsville.

Although the Tiger Cubs played in their own backyard, the night belonged to South Vermillion as the Wildcats earned a lightning fast 4-1 decision, moving on to face Owen Valley tonight at 6:30.

Greencastle's No. 1 singles player, Landon Miller, scored the team's only win of the night and in doing so punched his ticket to next week's individual tennis sectional tournament.

"Even when he hasn't won this year, he's plays well, he play smart -- so he earned that and I'm happy for him," Hirt said.

Miller's only struggles came midway through the second set when he let Blake win two games. His powerful first serve, which had been landing consistently up until that point, became inconsistent and Hirt said he told him to slow down and concentrate on getting the point.

"The couple games where it was starting to get a little iffy, one of them was a service game. If the first serve goes in, he'll win the point because it's just such an advantage to get that in, even if it's not at full speed," Hirt said.

Mike Waddell, the Tiger Cubs' No. 2 singles player, never could find a comfort zone facing the Wildcats' Kam Weyrauch. Instead of using power strokes to earn points, Weyraugh utilized an effective slicing shot that would at times skip and at other times bounce back into Waddell, giving the GHS player fits all night.

Waddell fell 6-0, 6-0, but Hirt saw some good things throughout his match.

"Mike struggled, but he did a lot of things well that we've talked about all year," Hirt said. "We were just talking with the team and how at the beginning of the year there was one match where he double faulted an entire game."

Hirt went on to say that a few weeks into the season, he stressed to Waddell the need for less double faults and that he work on his serving and noted Waddell has worked hard and become one of the most consistent servers on the team.

"That kid was more experienced and the team was more talented," Hirt said. "At some points he beats himself, but a lot of times later the second half of the year, he's been beat by better players and there's nothing you can do about that. That's the way he goes.

"I'm not unhappy with the way he played at all; I'm actually very happy."

Rounding out the singles players was No. 3 singles player Jason Ummel. The sophomore fought the entire match, but lost to Ben Cvengros 6-1, 6-1.

Hirt said he's looking for some good things for Ummel in the future.

"He's been hitting the ball well," he said. "There's a couple things we talked about that could have been better -- footwork, but his strokes are a lot better. Just within two weeks he's gotten better. He's a sophomore and he's going to be good, really strong for us the next two years."

Adam Gerard and Christian Richie lost their match with South Vermillion's Aaron Hines and Kaden Lawson 6-4, 6-1. They battled hard, but miscues befell the duo resulting in the loss. Hirt said Gerard and Richie play well together and possess good chemistry and noted emotion is a key component to their game.

"They get very fired up and very down on themselves, so their emotion kind of takes hold and can hurt them -- but it can also really help them," Hirt commented.

"As they move forward, if they play double next year together and right now that could be a very big possibility, but things can easily change. Either way they're going to bring a lot of intensity in the future and they're going to get smarter and more mature and so it's only going to get better. I happy with the way they played."

Greencastle's No. 2 doubles team of Alex Asbell and Kaleb Fleming also lost in straight sets to Eric Hire and Jordan Branz 6-1, 6-1. Hirt said it's been and up and down year for the duo and commended Asbell in his senior campaign.

"Our No. 2 doubles are kind of back and forth," Hirt said. "One day they'll lose to South Putnam, which played very well, and the next day they'll beat a more talented Owen Valley team. They're either on or they're off, but they play well together and they like playing.

"Alex is a senior and I'm really happy with his commitment this year and his leadership. Kaleb is a sophomore and he's going to be sticking around."

Although the night goes in the books as a 4-1 loss, it looks to be the start of something significant for the GHS boys' tennis program. As coach and players gathered to talk following the match, Hirt broke things down and gave some insight into what he sees in the program's future.

"I told the team I have inherited, as a coach and they've inherited as players, a program that doesn't have the resources that a lot of other programs have," Hirt said. "We don't have a middle school team. We haven't had coaches that necessarily just want to be a tennis coach really badly. We've had coaches who very gratuitously did it and worked hard, but they don't necessarily know a ton. Not that I know a ton, but I know the game. I've played the game, so I think we've turned a corner. I don't think the record shows it, but I know that we have.