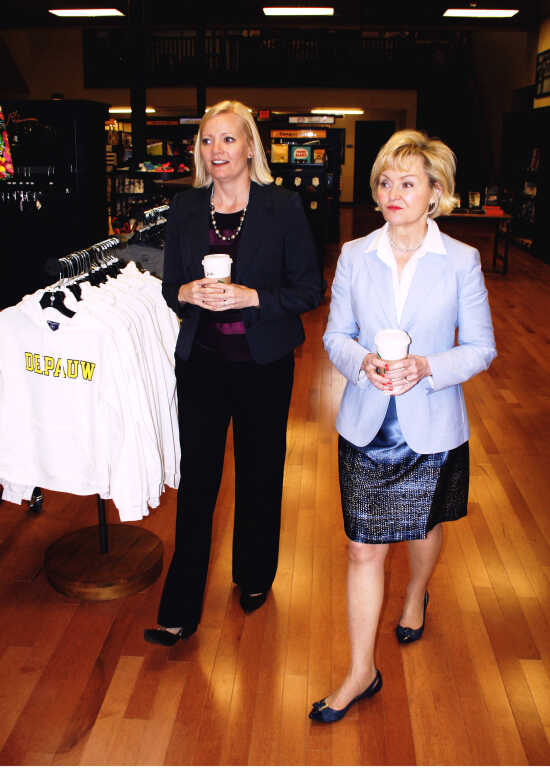 Beaming from the moment she set foot in Eli's Bookstore Wednesday morning to the second she left with a Starbucks coffee in hand, Indiana Lt. Gov. Becky Skillman was as impressed as she was proud of what is happening in downtown Greencastle.

After all, in reality Skillman is the mother of the Stellar Communities program. And for now at least, Greencastle is her favorite child

Skillman conceived it. She nurtured it along through proper state government channels. And now gets to watch it grow in Greencastle and three other Hoosier communities.

It was Lt. Gov. Skillman who came to Greencastle on March 10, 2011 to share the good news that the community was one of two Indiana towns (North Vernon the other) chosen for a pilot program founded on public-private partnership and city, state and federal agency cooperation.

The end result was more than $19 million in grants for the City of Greencastle. And that novel idea and collaboration Skillman created must seem a little like giving birth now that the gestation period is producing end results.

"It is," Skillman conceded as she strolled through the brand-spanking-new DePauw bookstore alongside Audra Blasdel, director of community relations and auxiliary services at the university, and Jackie Finney, bookstore manager.

"With four cities now named Stellar Communities (Delphi and Princeton are the latest), you don't know how rewarding it is to see the first project come to fruition," she told the Banner Graphic, glancing around the bookstore and adjoining Starbucks café that embody that accomplishment as the initial Stellar project ever completed in Indiana.

Starbucks particularly was brimming with activity and bustling with visitors, which at that moment included ESPN founder Bill Rasmussen and award-winning blues man and Greencastle resident Tad Robinson among students, professors and townspeople enjoying coffee and a relaxed atmosphere.

"I love how the history and integrity have been maintained as well," the lieutenant governor praised of the eye-popping renovation of the stately old Prevo's department store building.

Skillman was unable to attend last week's ribbon-cutting grand opening of Eli's and Starbucks due to the death of a close friend. However, Wednesday she made good on a promise to come see the progress for herself and spent about 40 minutes doing so.

"With just three months left (in her second term as Indiana lieutenant governor), I've got certain things on my list that are must-see. This was at the top of my list," she said, making a motion with her right hand, as if to check it off that pantomimed list.

Unfortunately, her schedule did not mesh with that of Mayor Sue Murray, who as Skillman visited Wednesday was in French Lick, attending the Indiana Association of Cities and Towns annual meeting and making a presentation about the Stellar Communities Program. 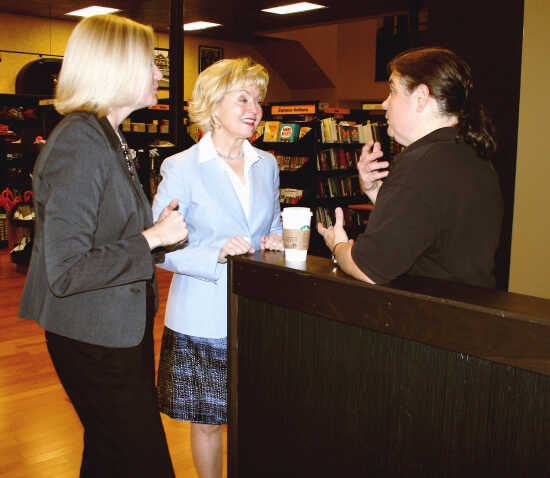 The word is apparently spreading far and wide as the unique program even won a national award for innovation just last week.

"That is the icing on the cake," Skillman said. "What a surprise to get that call!"

And while the Stellar Communities Program continues to grow, Skillman -- as any good mother would -- holds her first-born close to her heart.

With her term expiring as Gov. Mitch Daniels' second in command, Skillman hopes the next administration taking over in 2013 will continue to embrace the Stellar Communities effort.

"I certainly hope so," she said. "We know now that it's the right thing to do. There has been so much more collaboration among agencies as we dispense the grant dollars.

"We were breaking new ground," she stressed. "We knew it wouldn't be easy, and the project had to evolve project by project."

Already there is talk of other agencies wanting to get involved in the collaborative effort, she said.

There was virtually no resistance to the plan from the start, she told the Banner Graphic.

"It's mutually beneficial for the community and the state," Skillman pointed out. "It encourages communities to put a long-range plan in place, and it encourages agencies to work more closely together as we distribute taxpayer dollars.

"But in the end, we had to feel comfortable that we selected the communities that had the wherewithal to identify partners to work with and to move forward to completion."

Greencastle certainly did that, she praised.

Skillman noted that even the Hoosier communities that were not chosen for the two Stellar spots in 2011 or 2012 have benefited from the process. They now at least have examined their own communities and have a long-range plan in place.

"We have only scratched the surface of what can be done," she added.

With that she departed for her black SUV out front with special assistant Tyler Stock ordered to drive south on U.S. 231 to check out the Anderson-Bloomington street intersection that was recently reopened.

"I can't wait to come back and see everything when it's all finished," Skillman smiled in conclusion.