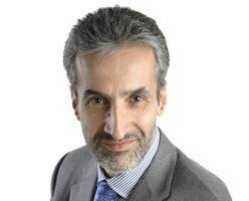 Freedman's speech, "Dirty Knees on the Campaign Trail: Religion in the 2012 Presidential Election," is set for 7:30 p.m. in Gobin Memorial United Methodist Church. Everyone is invited to attend the free presentation.

Freedman is the author of six acclaimed books, including "Small Victories: The Real World of a Teacher," a finalist for the 1990 National Book Award; "The Inheritance: How Three Families and America Moved from Roosevelt to Reagan and Beyond," a finalist for the 1997 Pulitzer Prize; "Upon This Rock: The Miracles of a Black Church," which won the 1993 Helen Bernstein Award for Excellence in Journalism; and "Jew vs. Jew: The Struggle for the Soul of American Jewry," winner of the 2001 National Jewish Book Award for Non-Fiction.

A Times staff reporter from 1981-87, Freedman currently writes the column On Religion. From 2004 through 2008, he wrote the On Education column, which won first prize in the Education Writers Association's annual competition.

He has also been a regular columnist on American Jewish issues for the Jerusalem Post and has contributed to numerous other publications, including USA Today, Rolling Stone and Salon. Freedman has also appeared as a correspondent on PBS' Religion and Ethics Newsweekly.

A tenured professor at the Columbia University Graduate School of Journalism, Freedman was named the nation's outstanding journalism educator in 1997 by the Society of Professional Journalists. His class in book writing has developed more than 60 authors, editors and agents.

Freedman holds a bachelor's degree in journalism and history from the University of Wisconsin-Madison.

Although Mendenhall was a pastor in the North Indiana Annual Conference of what was then called the Methodist Episcopal Church, one of the parents of the United Methodist Church, he explicitly dictated that lectures be selected without regard to denominational divisions.

The endowment has allowed DePauw to bring theological and religious scholars of international repute to campus.