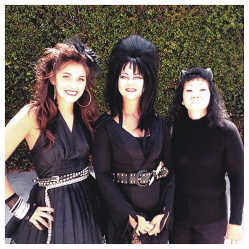 Former Greencastle resident Samantha Pearson (left) is dressed as a Madonna clone, while her aunt, Cha Lizdas, is decked out as Elvira, and her grandmother, Va Rukes, donned a cat costume for their visit to the taping of "Let's Make a Deal" in Hollywood.

When Madonna first sang "Material Girl" back in 1984, she lyrically assured that "only boys who save their pennies make my rainy day" and noted that Mr. Right is always "the boy with the cold, hard cash."

That may seem immaterial to some but a 22-year-old former Greencastle resident may have parlayed that advice into a big payday on the television game show "Let's Make a Deal" recently.

Fittingly dressed as "The Material Girl," Samantha Pearson, a 2009 Greencastle High School graduate who moved to Atlanta five months ago, was chosen to be a contestant on the classic game show during an Aug. 2 taping.

But whether she ends up with a fabulous prize from behind the curtain or a year's supply of Rice-a-Roni or even a dreaded "Zonk," Pearson is complying with "Let's Make a Deal" protocol (not to mention a confidentiality agreement) and not revealing much about her appearance on the show.

Pearson, daughter of Don Pearson and Joyce and David Young, all of Greencastle, went out to Los Angeles in early August to visit her aunt, Tasha McDowell. They made the obligatory tourist visits to places like the Hollywood sign and Warner Brothers Museum.

"My grandmother (Va Rukes) wanted to go to 'The Price is Right' but there were no tickets available," Pearson explained. "They offered us tickets to 'Let's Make a Deal,' so we ended up doing that."

Of course, as anyone who has ever seen the game show since it debuted with Monty Hall as host back in the 1960s knows, the audience dresses up, often outlandishly. Even before the show starts, audience members are competing to catch the producer's eye and end up as a contestant to possibly win "what Jay has in the box" or what's behind Door No. 1, Door No. 2 or Door No. 3.

Pearson dressed up as a vintage Madonna (think "Like a Virgin" era) clone, "kind of a punk-rock look with lots of bracelets and my hair teased way up with a big bow in it."

Standing outside in costume in the August heat was no picnic, she assured, as show staff members conducted a long interview process and advised them on "what you can or can't do on the show."

"But they don't tell you whether you're picked to be on the show or not," she added.

But Samantha the Madonna clone was. In fact those who watch Tuesday morning will see her as the very first contestant selected to schmooze with host Wayne Brady.

She actually was one of three contestants picked for the initial game.

"I got to pick first and had the option of a purse with a lot a money in it or the box," Pearson said. "I picked the box. The audience told me to take the box."

Comedian Wayne Brady is host of the current version of the classic television game show "Let's Make a Deal."

It must have been a big box because when the contents were revealed, Pearson's prize was a four-wheeler.

"When they first opened the curtain and it was a four-wheeler, my first thought was, 'How am I going to get that home?'"

Now safely back home in Atlanta where she is employed as an emergency room tech in a hospital ER while taking classes as a fulltime student to become a physician's assistant, Pearson stopped short of revealing how her final deal worked out.