Bigfoot investigators believe creature has taken a toehold in area 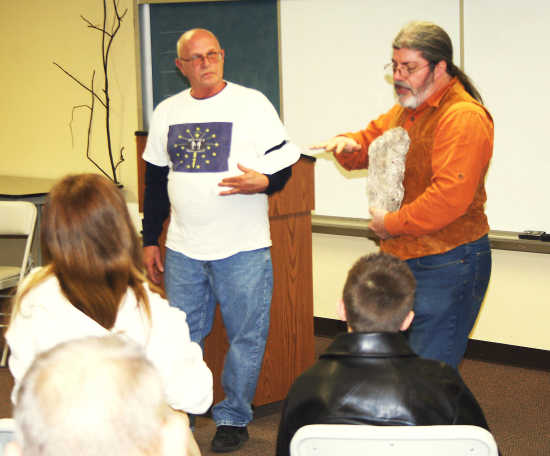 Fittingly, a topic nestled somewhere between fiction and non-fiction was the subject of a Putnam County Public Library program Thursday night.

More than 40 persons, including several parents with small children, came to the library to hear stories and learn about the legendary Sasquatch, or the infamous Bigfoot.

And judging from their reaction, the audience wasn't disappointed at what wildlife biologist/naturalist Tim E. Cassidy and Steve Abney, director of the Indiana Chapter of the North American Fortean Society shared in the two-hour program at PCPL.

Both Cassidy and Abney claim to have had encounters with a Sasquatch in the woods of Indiana. They said Indiana has a history of such sightings over 170 years.

Cassidy, who calls himself a conventional scientist, told the group his first experience came on July 11, 1996 while he was a naturalist at Lake Monroe, south of Bloomington.

After literally running into a Sasquatch in the dark woods, Cassidy said, "I'm not a skeptic anymore. The question I have now is how do they live and how do they prosper?"

He explained that he was leading a night hike around Lake Monroe with a female assistant and others. They had flashlights but had them turned off and were walking as quietly as possible in the dark, trying to experience nightlife at the lake.

"It's hard to talk about, it still is," he said, noting that reality changed for him that night not as much by what he saw but what he smelled.

The awful smell of the creature that appeared in the darkened woods produced physical reactions he hadn't experienced before, Cassidy said.

"When that smell hit our noses, it basically set off the adrenaline in our brains," he said. "The hair stood up on the back of my neck. I wanted to run instinctively but the smell said 'danger.'

"My body went though a secondary change from flight to fright," Cassidy continued, "all because of a single smell."

Pulling out his flashlight and shining it in the direction from where the smell seemed to be coming, Cassidy was surprised by what he saw.

When people ask how he looked, Cassidy reacts by cowering and throwing an arm up in front of his face. "Like it had a flashlight in its eyes."

He described the creature he saw as about eight feet tall.

"I wanted to hug him, to be honest," Cassidy said.

Meanwhile, his female co-worker was on the verge of hysterics.

She screamed, "Let's get out of here," and Cassidy said it was the "only time I've run from anything in my life."

The woman quit about a week after the experience and is no longer even a naturalist, Cassidy said.

The first sightings in Indiana date back to the 1830s, Cassidy said. An Amish farmer even wrote about a supposed encounter in his 1840 autobiography.

"And you won't find anybody more honest than an Amish farmer," he said.

Almost every culture in North America has a Bigfoot or Sasquatch creature in its lore, he added.

Abney, meanwhile, said Indiana has had 150 sightings. He cautioned that a sighting, however, takes three things to occur -- "a Sasquatch, a human being and a human being willing to report it."

He said people ask him, "How can you talk about something like that? It's a myth or a legend."

Not true, says Abney, who claims he has had 27 personal sightings, while his wife Violet has had 11.

Preferring to call them "Sasquatch people" rather than classify the disputed creatures as animals, Abney said he is working with four Putnam County landowners whose properties have shown signs of the "Forest People."

He urged audience members to open their hearts and their minds about the issue.

"You ask if they're in Greencastle," he said, responding to an audience question. "They are, and they're in Parke County. They're people but they live in an animalistic world."

Like Cassidy, he also spoke of the putrid smell associated with Bigfoot sightings, and said he has "been skunked three times," getting hit with "a chemical smell like nothing I've ever smelled before."

Abney said his first Putnam County incident reportedly occurred in 1975, but he won't give out sighting locations or client names associated with them.

"Am I out to prove Bigfoot exists?" he asked. "No, I already know."

Abney, who said Thursday's appearance at the library was his first public speaking occasion, said there is no such thing as an expert in the field.

Cassidy and Abney displayed plaster casts purported to be from Bigfoot footprints.

Asked about the lack of physical evidence like skeletons or bodies, Cassidy dismissed the notion that proving the existence of Bigfoot is like trying to prove that aliens from outer space have visited us.