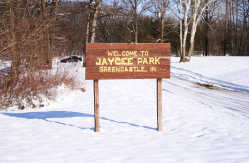 The entrance to Jaycee Park off Airport Road currently offers a snow-covered glimpse into the secluded park's sheltered environs southeast of Greencastle.

Currently covered with a glistening blanket of mostly undisturbed snow, Greencastle's Jaycee Park is probably more suited right now to cross-country skiing than it would be as somewhere to traverse trails by foot or mountain bike.

However, a group of enthusiastic local volunteers, led by mountain biker Ted Kissel and spokesman Tom Standers, has brought the idea of multi-use Jaycee Park trails to the attention of the Greencastle Park Board.

At its January meeting, the Park Board heard Standers say, "Community members are very interested in having the trails revitalized at Jaycee Park."

The volunteer group listed its goals as promoting greater public use of Jaycee Park, providing a local venue for trail enthusiasts, and possibly creating an event destination to benefit the Park Department in the future.

Restoration work on the trails, mainly clearing brush and moving timber that may have fallen across the paths during years of non-use, would all be done by volunteers, many of whom joined Standers and Kissel in the audience at City Hall.

Where the trails were once actively used by riders and hikers in the 1980s and 1990s, they have become overgrown to the point they are barely recognizable, Standers said.

"Ted Kissel really kicked this off," Standers said, mentioning the Greencastle resident who first approached park officials about the idea in December. "Ted wants to do a mountain bike trail, and the runners want a place to run.

"A multi-use trail is what we're looking at," Standers continued, asking the Park Board for its approval to revitalize a less-than-mile-long trail that already exists at the city park, tucked into the countryside adjacent to the southwest side of airport property.

They suggest the trail could be used for mountain biking, trail running, walking and hiking. No motorized vehicles would be allowed on the trail.

Meanwhile, any work by the volunteers would not disturb the Boy Scout trail currently available at the park, they noted.

Concerning the proposed work by the volunteers, Standers noted that it would require mostly manpower and rakes to clear the trail. Volunteers would move fallen trees, only as necessary, off to the side of the trail.

"Removal of standing trees and vegetation will not be necessary," he assured.

"From what I saw, if we have 20 volunteers on a given day and worked all day, we could have it roughed out," Standers said of the trail timeline. "It might not be ride-able at that point. Actual trail use is what really creates a trail."

He predicted it would take about four or five days of work to get such a trail to usable status.

Once the trail is near completion and ready for public opening, the committee intends to present the Park Board with a proposal for trail use and safety rules.

"I think it's a fabulous idea," Park Board President John Hennette commented. "I applaud you for bringing this together."

With that said, board member Tim Trigg made a motion to allow the committee to move forward and restore the Jaycee Park trail. Kyle Kerrigan seconded the motion, which passed unanimously, eliciting applause from the audience.

"I'm thrilled to see a roomful of people here in support of this project," Greencastle Parks and Recreation Director Rod Weinschenk said, noting that more use of Jaycee Park has long been one of his goals.

"It's a start," he added. "It's a step forward. I've been telling people for years that Jaycee Park is a hidden jewel of Greencastle."