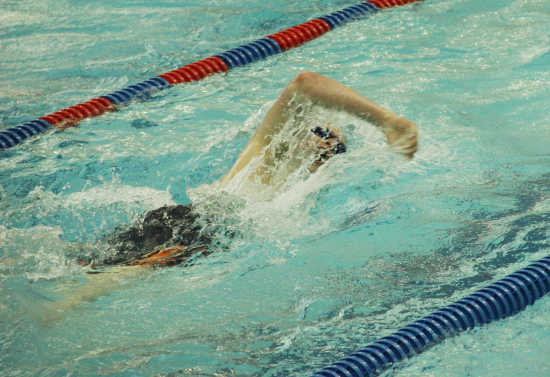 PLAINFIELD -- As a small school, the North Putnam boys' swim team must enter the postseason with its sights set on individual, rather than team, success.

The Cougars were able to accomplish these goals, in some cases with dramatic success, at Saturday's Plainfield sectional final.

The Cougars accomplishments went beyond just Dane Gray, as several swimmers had significan't drops in time.

The two freestyle relays dropped a combined 7.5 seconds, setting school-records in each.

Troyer, freshman Jonah Creamean, senior Joe Lehr and Dan Gray put together a sixth-place finish in the 400 free relay in a time of 3:36.82.

"And unfortunately the 200 free relay team went under 1:40, so it looks like I'm breakdancing at lunch on Tuesday," NPHS coach Tony Gray said.

The Cougars also got a strong performance from junior Nick Kaufman, who pulled off a rare sprint-dive double.

The Cougars finished the meet in seventh place as a team, which was nearly as high as coach Gray said he could hope for.

"I'm just walking on air again," he said. "The schools that have summer programs and USA clubs attached to their schools are in the top four or five, and then it's the best of the rest ... I told the kids it strictly was a stopwatch today. If we can stop it just a tick quicker than we did Thursday, then we had a great day. I loved the team spirit. They were rooting for each other, and I couldn't have asked for a better way to finish it out."

"Joe Lehr has been a four-year swimmer for us. He's given great senior leadership," Tony Gray said. "On the mornings when it was 10-below zero and we were going in for practice at six in the morning, he was there to root the kids on and make sure they were fired up and motivated. He's just been a great individual for our program and a quality kid. And a great swimmer

"Jacob Hendershot is a kid that I convinced just to come out his senior year here. You saw what he did today. He's just a great athlete and a great addition to the team that helped us have some of that senior leadership that we needed."