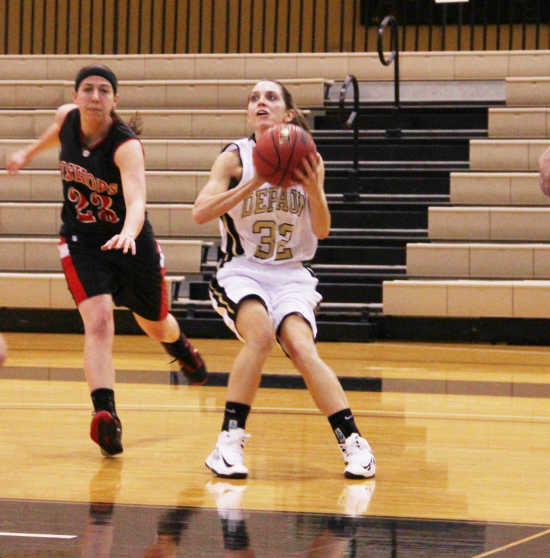 DePauw junior Ali Ross pulls up for a jumper in a game earlier this year. Ross scored a team-high 15 points against Wooster on Saturday. (Banner Graphic/GRANT WIEMAN)
Order this photo

The DePauw women's basketball team wrapped up a perfect regular and conference championship Saturday as it overcame a rocky start to take care of visiting Wooster 76-41 on Senior Day. The 35-point victory completed the first perfect regular season in program history.

After allowing Wooster to keep within striking distance early, DePauw was able to begin extending its lead and blew the lid off at the midway point of the first half.

With the score 27-10 in favor of the Tigers, Wooster's Maura Hall hit a layup with 9:01 remaining. It would be the Fighting Scots' last converted basket of the half. They added two more free throws, but DePauw was firing on all cylinders and raced out to a commanding 43-14 halftime lead.

The Tigers shot 46 percent from the field and 50 percent from three-point range. While that percentage dropped in the second half, DePauw continued to find ways to put the ball in the hoop.

The Tigers built on their lead with senior Ellie Pearson getting things going with a pair of free throws to begin the second half. Junior Alex Gasaway and senior Kate Walker added baskets to keep the Tigers' offense rolling.

Junior Alison Stephens gave DePauw its largest lead of the afternoon -- 39 points -- with a jumper at the 5:26 mark.

The afternoon was capped when seniors Walker, Pearson and Kathleen Molloy left the court together to thunderous applause in the game's final minutes. The win gave the trio its 111th career victory for DePauw.

Junior Ali Ross led the Tigers with 15 points, with Walker adding 12 and Pearson and Gasaway scoring 11 each. Walker led her squad with nine rebounds, with Pearson had seven.

DePauw dominated the game in the post, outscoring Wooster 30-10 in points in the paint. They also outpaced Wooster 32-9 on point off turnovers and in rebounds 45-23.

The Tigers will begin their NCAC tournament run against Hiram tonight at 8 p.m.