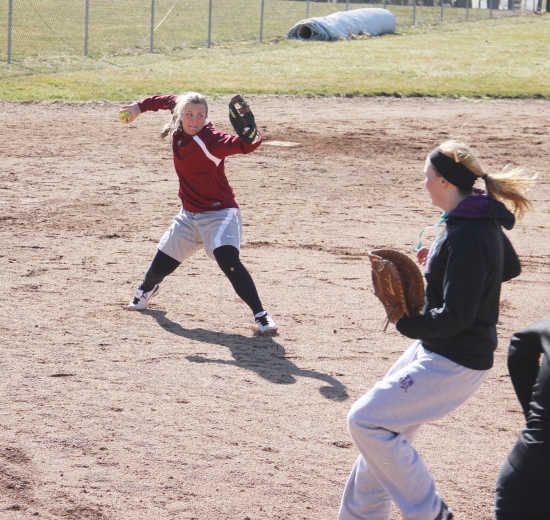 Senior third baseman Jenna Jones attempts to throw out a runner during a recent practice as sophomore pitcher Ashlee Gibson ducks out of the way. Jones will play for Miami University next season. (Banner Graphic/GRANT WIEMAN)
Order this photo

When the South Putnam softball team takes the field for its first game on Monday at Cloverdale, it will bring with it a win streak of more than 60 games. The top-ranked Eagles, with several returning starters, aren't ready to let it end just yet.

Brooke Boetjer, the team's starting pitcher for the past few season and Indiana's 2012 Miss Softball, has moved on to Indiana University, but head coach Chris Jones said he doesn't expect opposing offenses to start scoring much more. If the offense stays strong, it could be another solid year.

"We have a little different dynamic and we want to gel together and reach our maximum potential," Jones said. "Defensively, I think we should be fairly strong."

Sophomore Ashlee Gibson is set to handle the lion's share of the innings on the mound, with senior Mattie Varvel ready to step in whenever she is needed.

"We'll have a different look on the mound, but I think our defense and our pitching still should be our strengths," Jones said.

Among the team's returning starters are senior Jenna Jones, who has committed to play for Miami University next season, Varvel, junior Kenzie Trisler, senior Janet Crafton, junior Brooke Cundiff and senior Kelsey Whitaker, each of whom was named to last season's all-county team.

"This is (the seniors') fourth year with a very successful program," Jones said. "They've been able to really lead and help the girls through what we expect and what we're expecting to do this year."

Jones, last season's Coach of the Year for Indiana, was reluctant to share how far he thinks the team can go. For now, the squad remains focused on the road ahead: getting better each day.

If the team's returning players can improve from last season -- the second of back-to-back state championships -- and the younger players meet their expectations, it's hard to see how the season will be anything but a success.

"If we can get better every game; if we can maximize our potential and then just play hard and be focused all the time, I think we can do some good things," Jones said. "At the end of the day, that's the same goal we've had for the past couple years."