By BRUCE STINEBRICKNER, Special to the Banner Graphic

Compiled by Bruce Stinebrickner in the aftermath of the Tigers' winning the 2013 Division III NCAA championship, this list may help summarize how dominant the Tigers were this past season. Basketball aficionados may well be familiar with much of the information presented below. Even such aficionados, however, might find the entries after the numbers 5, 7, and 444 of particular interest. 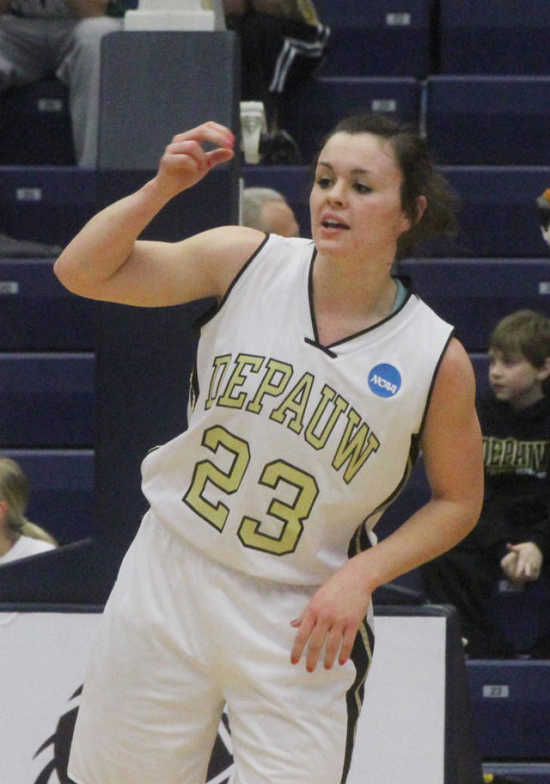 DePauw senior point guard Kate Walker can display on one hand the number of loses her team had this year en route to the national championship: 0. (Banner Graphic/GRANT WIEMAN)
Order this photo

Number of Division III women's basketball teams that have won 34 games in a season prior to this season's undefeated Tigers.

Number of teams that have won multiple Division III women's hoops championship in the past 10 years (DePauw: 2007, 2013).

Number of games won by single-digits this season by the Tigers. The team only had one close tournament game, the national semifinal win over Williams. DePauw won tournament games by an average of 19.5 points, the third best in tournament history (Wash. U, 2000, 28.8; Wisc.-Oshkosh, 1996, 19.8).

Number of seniors who provided good leadership and great basketball play all season, and whom Coach Huffman has said were an "extraordinary" trio of individuals (Kat Molloy, Ellie Pearson, Kate Walker).

Number of seasons after which coach Huffman has been named Division III women's basketball Coach of the Year, including this season.

In the 32-year history of the Division III women's NCAA hoops tournament, the number of seasons in which the championship teams posted undefeated seasons.

Number of consecutive games (over two seasons) in which the Tigers had out-rebounded their opponents entering the national championship game before Wisconsin-Whitewater pulled down one more than DePauw.

Approximate number of Division III women's hoops teams from which the 64-team NCAA postseason tourney participants are selected (There are currently about 340 Division I colleges and about 322 Division II colleges.)

Number of wins coach Kris Huffman has since her coming to DePauw twenty years ago. The Tigers have lost just 102 games since she came to the school, good for an .820 win rate. DePauw women's hoops teams had winning percentage of .377 before Huffman arrived.