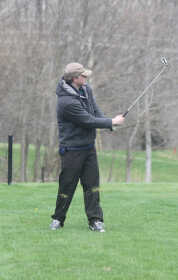 North Putnam senior Jon Willard follows through from a pitch shot during a round earlier this season. (Banner Graphic/GRANT WIEMAN)

LIZTON -- The Cougars traveled to take on Tri-West on Monday and, more than any meet so far for North Putnam, it proved to be like what golf is all about.

After all the rain moved past, the evening turned out to be the nicest the Cougars have played in this year and they beat the Bruins 167-180.

Danny Smith was medalist again with a score of 38; Mason Asher and Austin Judy followed up with 42s; Jon Willard and Jake Holtze pulled in with 45s; Steven Hostetler, in his first meet of the year, shot a 48 and Bennet Hazelgrove carded a 52.

"I am very happy with the performance of every teammate in their efforts to continue a Cougar winning streak," Cougars coach Linda Patrick said. "After some disappointing scores in the Danville Invitational, I told the boys to just relax a little and their normal game will come."

All totaled, the Cougars managed to shoot one of their lowest scores in recent years, coming to the clubhouse with a 167. Tri-West carded a 180 in its first meet of the year.

"We still have struggles with our short game, especially putting," Patrick said. "This is what every team struggles with early in the season. We need to cut down some of the three-putt situations from the scorecards.

"I feel that within a few more meets we will have everyone consistently shooting a score that we can generally depend on for each meet."