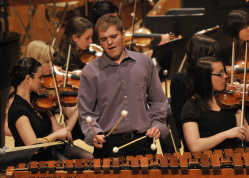 A wide range of musical styles from the 18th-century to the present -- including two new works by Indiana composer Alexis Bacon and by DePauw University student composer Josiah Rushing -- will be featured on the Percussion Ensemble's spring concert "Fire, Fugues and Fandangos" on at 7:30 p.m. Thursday in Kresge Auditorium.

The concert opens with Emmanuel Séjourné's fascinating "Vous avez de feu" ("Have You Got a Light?"). Two fugues from "The Well-Tempered Clavier," by J.S. Bach, and two 20th-century works, "The Frame Problem" by James Romig and "Second Construction" by John Cage, will follow.

For fandangos, director Amy Lynn Barber has also programmed not one but two premieres.

"It mixes traditional Brazilian instruments and musical elements with her own musical language," said Barber, percussion professor at DePauw. "While our graduating senior percussionist Josiah Rushing's piece 'Snap, Crackle and Pop,' features sophomore Beth King on alto saxophone, along with an exploration of some unique sounds on the marimba.

"Josiah has been showcased many times during his four years as a performer, and we are pleased to feature him as a composer on this concert as well," Barber added.

Bob Haggart's "Big Noise from Winnetka" will conclude the concert. Popularized through Bette Midler's recording "Divine Madness," the work originated in the 1930s as an impromptu improvisation between a jazz bassist and a drummer.

The arrangement to be performed Thursday will feature Andrew Bosomworth on timpani and Josiah Rushing on drums.

General admission tickets to the Percussion Ensemble performance are $3. All students, children and seniors over 65 are free.