Improving the Planet is Up to Each of Us, World-Renowned Primatologist Jane Goodall Says in Ubben Lecture

Improving the Planet is Up to Each of Us, World-Renowned Primatologist Jane Goodall Says in Ubben Lecture

"Every single one of us makes an impact on this planet every single day," Jane Goodall told an audience at DePauw University tonight, adding, "and we have a choice as to what kind of impact we're going to make." The world-renowned primatologist, United Nations Messenger of Peace and founder of the Jane Goodall Institute delivered a Timothy and Sharon Ubben Lecture, "Sowing the Seeds of Hope." 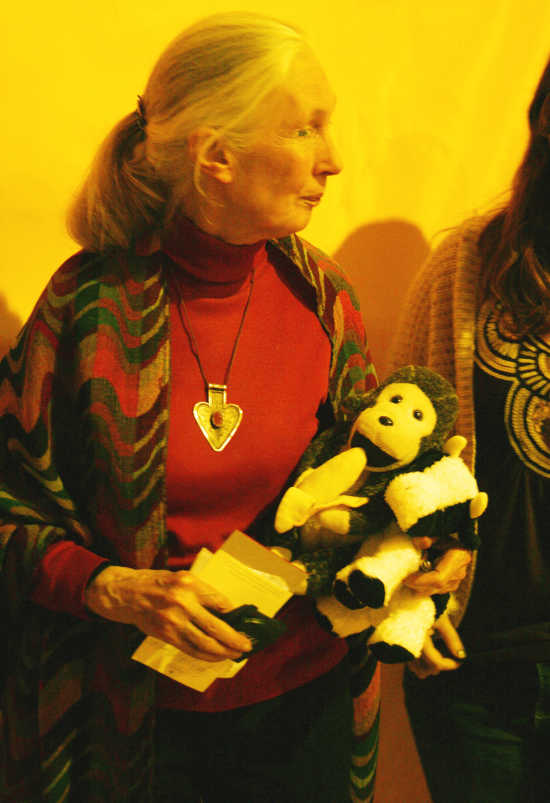 Speaking to a large crowd Wednesday night at DePauw University's Neal Fieldhouse, world-renown primatologist and conservationist Jane Goodall appears as part of the school's famed Ubben Lecture Series. During a 90-minute appearance, she stressed that it is not too late to affect environmental change. "We all know we can't go back," she said, "so we will need to adapt to climate change." To do that, Goodall noted, people need to "make choices every day to do just a little better" in terms of caring for the environment. As she spoke, she shared the podium with two mascots she's clutching -- a toy stuffed cow, given to her during a speech in Wisconsin, and a toy stuffed monkey that has accompanied her to 59 different countries and "has probably been touched by four million people." But don't worry, she noted, "he does get washed."

A standing ovation greeted Goodall as she took the stage in Neal Fieldhouse, where a crowd of about 2,300 braved a thunderstorm to gather. She welcomed her audience with a "greeting that you would hear if you came with me to Africa to one of the forests where the chimpanzees live," and proceeded to deliver a chimp call to the audience's delight.

As a child growing up in London, Goodall was drawn to animals and books such as Dr. Dolittle and Tarzan of the Apes. Reading the latter -- in which, she quipped, the title character chose "the wrong Jane ... began my love affair with Africa; my determination that I would get there one day, of living with animals in Africa, and writing books about them," she told the crowd.

The conservationist, ethologist and anthropologist thanked her mother for being patient and offering her daughter encouragement as she demonstrated curiosity about the animal world. While others suggested to Jane Goodall that she pursue "achievable" goals, her mother "used to say -- perhaps not in exactly these words -- but basically, if you really want something you've got to be prepared to work really hard to take advantage of any opportunity and never give up. And that's the message that I can take around the world today."

A second key mentor was Louis Leakey, the British paleontologist, archaeologist and anthropologist "who spent his life searching for the fossilized remains of our Stone Age ancestors." She began as his secretary, but with his support she began studies of primate behavior that have made her world famous and findings that dispelled long-held beliefs -- for instance, chimpanzees are not vegetarians and, like humans, can construct and use tools.

"It became obvious that the chimpanzees were far more like us than we'd thought before," Goodall said. "Indeed, if I look back over the 54 years that we've been working at Gombe (Stream Chimpanzee Reserve), if I think about the other information that's being gathered as people study chimpanzees in other parts of Africa and what we've learned from studies in captive situations, the thing that really strikes one is how like us they are."

Dr. Goodall captivated her DePauw audience with detailed descriptions of her life's journey and her ongoing efforts to protect chimpanzees and their habitats. She established the Gombe Stream Research Center in 1964 and today remains operating as one of the longest uninterrupted wildlife studies in existence. In 1977, she established the Jane Goodall Institute, which now has nineteen offices around the world and oversees community-centred conservation and development programs in Africa. In 1991, JGI created Roots & Shoots, an organization designed to empower young people to work toward improving the environment and the quality of life for people and animals. The organization now has more than 10,000 groups in over 100 countries, and participants range from pre-school students to college students.

"We are destroying our only home," Goodall, who turned 79 earlier this month, asserted. She now spends 300 days a year traveling the globe to make people aware of how the depletion of the world's natural resources, financial instability, and a lack of political will to enact real change threatens the future of the world and its inhabitants.

She asked the crowd, "Is it too late to make changes? I don't think so."

Goodall sees many reasons for hope, chief among them "the energy (and) commitment of young people who understand the problems and are empowered to and are then taking action."

She noted that her JGI colleagues visited DePauw's Janet Prindle Institute for Ethics and learned of the student-led initiative to create a sustainable campus farm. "It was started by somebody named Ashley," Dr. Goodall pointed out, "and the young woman said that she was inspired by a talk I gave to start this organic farm. And Sean (Sweeney of JGI) says it's wonderful and I wish I could have gone to visit it myself."

Goodall's many books include In the Shadow of Man, Reason for Hope, Chimpanzees I Love: Saving Their World and Ours, The Chimpanzees of Gombe: Patterns of Behavior and Hope for Animals and Their World: How Endangered Species Are Being Rescued from the Brink. Her scores of honors include the Medal of Tanzania, France's Légion d'Honneur, the National Geographic Society's Hubbard Medal, Japan's prestigious Kyoto Prize, the Prince of Asturias Award for Technical and Scientific Research 2003, the Benjamin Franklin Medal in Life Science, and the Gandhi/King Award for Nonviolence. In 2003, Queen Elizabeth II named Dr. Goodall a Dame of the British Empire, the equivalent of a knighthood.

Tonight she said, "We can never put the world back the way it was -- at least not in our lifetimes -- but that doesn't mean that we can't make a very major difference and slow down global warming and climate change and learn to adapt and put right some of the wrongs. Of course we can do that."

Solutions to our problems require a combination of "this very clever brain and the human heart," Goodall said.

"Looking around this room -- all of you young people and your mentors, your parents, your teachers -- just think, if every single one of you is making choices each day to make things just a little bit better for the planet what a difference just that will make. Just think I've been all around for the last seven weeks talking to people like you in big groups, and if everyone is jumping in and making their tiny 10 cents worth of difference, put that all together, you are definitely, definitely helping us to move towards a more sustainable future, towards a better future for all the unborn children, for my grandchildren and theirs, and yours who exist or will exist in the future."

Dr. Goodall received two more standing ovations -- one following her remarks, and another as she concluded a question-and-answer session led by DePauw student journalists.

Her day at DePauw began with a forum with students, led by Jen Everett, associate professor of philosophy, and Kevin Moore, professor of psychology and director of the Honor Scholar program. Goodall then held a news conference with student media outlets and gathered with students, alumni and President Casey for a dinner at The Elms.

"Everywhere I go there are friends -- current friends, friends from the past -- but no friends ever vanish. And I haven't seen Judson and Joyce Green for years, but they're part of this University, they are graduated here, they've contributed to the development of this University and I had the pleasure of dinner with them here tonight," Goodall noted as she began her speech. "So it's a place for making new friends and making contact again with old friends."