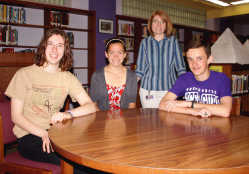 Members of the Greencastle High School English team will compete in the state finals Saturday after posting the highest English score in the state during area competition with 22 of 25 questions answered correctly. Coached by GHS teacher Nicole Kempf (standing), the team is composed of (from left) Hannah Gellman, Lily Spencer and Zach Wilkerson.

For Greencastle High School is sending three teams -- English, Science and Interdisciplinary -- to the 26th annual state finals Saturday, May 4 at Purdue University in West Lafayette.

And of the six overall academic teams fielded by Greencastle, five of them took first place at the recent area competition staged at GHS.

"And of those six teams, half of them are going on to the state Super Bowl finals," GHS Science team coach Brad Kingma pointed out.

Made up of Hannah Gellman, Lily Spencer and Zach Wilkerson, the GHS English team earned the highest Class 3 score statewide during the recent area competition. They correctly answered 22 of the 25 questions in winning the area contest.

The Science team, coached by Kingma, is also finals-bound and will vie with Indian Creek, North Knox, Bishop Luers, North Newton and Wapahani high schools for the Class 3 Science title.

GHS Science team members are Beth Ann Hansen, Erik Norlin and Avery Robinson. They also had 22 right answers at the area level, two fewer than Indian Creek and North Knox, both of which registered 24 of 25.

GHS is one of three teams with 17 correct answers at the area contest to move on to state competition. Greencastle will be up against Indian Creek, Cardinal Ritter, Park Tudor, South Spencer and Wapahani in the Interdisciplinary state finals. 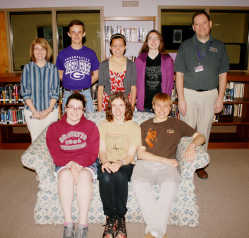 South Putnam won the area Fine Arts competition but did not qualify for the state contest. GHS was the only Putnam County school to qualify teams for the state finals.

Kathryn Dory is the overall Academic Super Bowl coordinator for Greencastle, which has a history of sending teams to the state finals dating back to the first year in 1987.

Schools are divided into four classes based on school size. Each school was represented in the competition by three to five persons on a subject area squad with as many as 30 students representing schools on the various squads.

Results of the Greencastle Area competition for Class 3 were as follows: