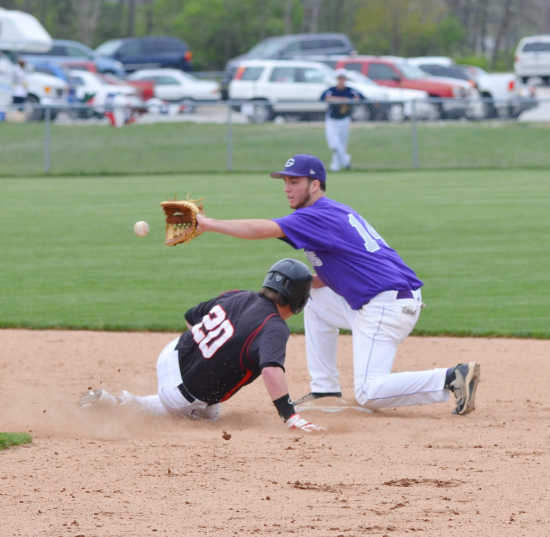 Greencastle senior Nick Gilliam, playing shortstop, receives a throw from the plate to try to nab the baserunner on Saturday. (Banner Graphic/TRENT SCOTT)

The Tiger Cubs were handed a pair of defeats Saturday, losing to the host Warriors 10-1 in the opening game and falling to Cardinal Ritter 9-7 in the consolation game.

A year ago, Greencastle lost its opener to Covenant Christian 6-5 and would have played Ritter had weather not scrapped the meeting.

The same path appeared again after the Tiger Cubs committed six errors and gave up seven unearned runs against the Warriors.

It was the kind of performance that Greencastle head coach Troy Remsburg has seen far too often this season.

"The score does not really tell the story about the game," Remsburg said. "We gave away seven runs on errors. It was 1-1 and then 3-1, but one bad inning killed us.

"Errors were the story of the first game and of our whole season. We had the same amount of hits as Covenant but when you have nearly as many errors as you do hits, it's hard to win a game."

The hosts started off with a run in the first inning after a pair of wild pitches allowed shortstop Zac Riffle to come home on a fielder's choice.

Greencastle had the chance to respond and loaded the bases in the top half of the inning but failed to capitalize after a strikeout ended the inning.

The Tiger Cubs tied the game briefly in the top of the fourth after Nick Gilliam reached base on a single. Tyler Scott reached base on an error and Seth Brown drove Gilliam in with a single to level the score at 1-1.

Covenant Christian got two runs in the bottom of the inning off of two errors, two walks and a hit batsman and blew the game open in the fifth inning.

A pair of errors and a walk set up Caleb Keehner's two-RBI single while a third error and a wild pitch saw two more runs cross the plate to give the hosts a 7-1 lead.

The Warriors plated three more runs in the sixth to comfortably win by the nine-run margin. This set Greencastle up with Ritter, which gave up three runs in the bottom of the seventh to lose to Mooresville 5-4.

After two scoreless innings to start the game, Ritter struck first in the bottom of the third. The Raiders nailed three singles and stole three bases to start the inning with a 2-0 lead.

Ritter loaded the bases but nearly failed to add on after Brandon Gierke coaxed a double play ball out of Christian Vela.

When the inning was extended with a walk, Anthony Ryback plated two more runs with a single that gave Ritter a 4-0 lead.

Greencastle fell into another bases-loaded jam in the fifth, but it escaped with only one run worth of damage after Ryback rolled into a double play and Hunter Calvert flew out to Scott in centerfield.

Down 5-0, the Tiger Cub offense finally sprang to life with a seven-run sixth inning.

Two walks and a single left the bases loaded for Gilliam to single in Gierke for Greencastle's first run.

Scott, Seth Brown and Dylan Harbaugh each singled in a run to cut the deficit to 5-4. Cole Pohlar then walked to tie the game at 5-5.

Brent Mangrum appeared to foul a ball off his foot, but no call was made and the left fielder was thrown out at first.

Simultaneously, Scott scored when the catcher was judged not to have been on home plate for a force out, giving Greencastle a 6-5 lead.

Harbaugh scored on Gierke's sac fly and the Tiger Cubs entered the bottom half of the inning with a 7-5 lead.

Ritter responded swiftly with a pair of singles, a pair of walks and two passed balls that resulted in four runs to give the Raiders a 9-7 lead.

Greencastle could not answer back and the Tiger Cubs continue to look for their first win in three weeks.

Remsburg said that while the squad fell again in the second game, they could have rolled over but kept plugging away.

"Our record's not the greatest in the world, but these guys have not given up all year," Remsburg said. "We were down 5-0 and they would not give up. They fought back and went two ahead.

"It wasn't enough, but they don't give in. They're not getting discouraged, but something hasn't been on our side this year.

"Defensively, we can play with any team we've faced this year," Remsburg added. "We've been stung by the errors. When we make the silly little mistakes like in the first game, you're not going to win many games like that."

With a West Central Conference series against Monrovia Monday and Tuesday, Remsburg said the one thing the squad needed to find was a confidence boost.

"We just need to keep battling and make fewer mistakes," Remsburg said. "We've got seniors, juniors and a couple of sophomores and freshmen playing for us. 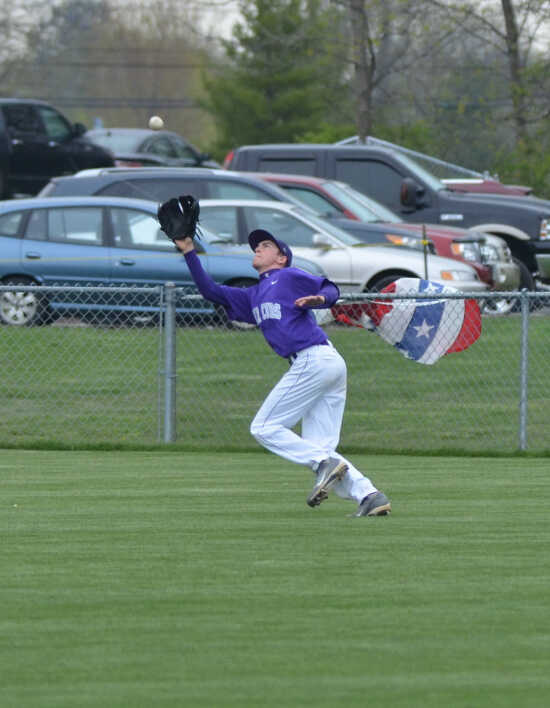