Shortly after the meal at the opening of the official program, Campbell prayed that Americans might correct themselves from a moral standpoint so that they might then fix the country economically.

In calling on his listeners, the local leaders of the Republican Party, to be missionaries with the party's message, Rokita invoked Campbell's words from a few moments prior.

After asking for prayers for Washington, D.C., he called on the leaders gathered at the Fairgrounds Community Building to step outside their comfort zones in delivering the message of Sunday's talk and of the party in general.

"This is mission work," the second-term congressman said. "You have to be able to talk to people about these things who aren't in your comfort zone.

"You have to grab two people every week, at least, that you wouldn't otherwise talk to," Rokita continued. "It won't change unless you demand it."

The 4th District representative said his party needs to stick to its beliefs, not change its approach based on any perceived wounds from the last election cycle.

He instead called on Republicans to remember their values and let those be their guide.

"Some say this party isn't diverse enough. Don't listen to that," Rokita said. "This is a beautifully diverse party."

He went on to talk about his colleague Raul Labrador, a Puerto Rican, Morman, Republican congressman from Idaho's 1st District.

"If he (Labrador) were standing here, he wouldn't look anything like Todd Rokita," he said.

He added to the list. Congressman Sam Johnson is a disabled Vietnam veteran from Texas. Congresswoman Cathy McMorris Rodgers serves eastern Washington and, like Rokita, is raising a child with a disability.

Adding notable African Americans Condoleeza Rice and Colin Powell to his examples, Rokita said the party is a family, as is the entire country.

"We are having a family discussion right now," Rokita said. "Let the disagreements happen. That is part of what we have to do."

However, in having this discussion, he called upon his listeners not to forget a core set of beliefs.

It was a theme he would return to multiple times in the talk, saying later "freedom is more when government is less" and "the best way to ensure that government remains limited is to stop feeding it." 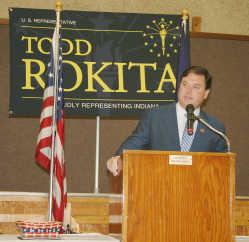 Calling on local Republican leaders to get out of their comfort zone, Congressman Todd Rokita tells the Putnam County Lincoln Day audience to view political discourse as "mission work," sharing their views with those who may not agree. (Jared Jernagan photo)

On subjects such as the Affordable Care Act, higher taxation and carbon trading, Rokita said most discussions at the federal level are essentially tied to the concept of decision making and whether decisions are better made by individuals or the government.

Having spoken to a group of local high school students during the meal, Rokita also referenced the federal deficit and its effect on these young people.

With the deficit at $17 trillion and an estimated additional $100 trillion coming in the next 40 years, Rokita said Americans are doing a disservice to future generations.

"Not only are we taxing ourselves for this federal government, we are taxing people who don't even exist yet," he said.

He listed his final core belief "that each generation should leave the next generation better off." He told the audience America is failing in this regard.

"But I'm an optimist," Rokita continued. "I'm optimistic because our leaders are here. You will grab two people every week. We'll do the mission work.

"When we do things right as a party," he added, "we are the party of the Constitution."

That 18th-century document, Rokita said, continues to be what makes America exceptional.

"It's not that we think we're better than anyone else," he said. "It means that we are unique in history. We're unique in that we have a document in the Constitution that contains the best ideas for self-governance that mankind has produced."

With that, Rokita handed the program back over to county chairman Jerry Ensor, who thanked vice chairman Sherrie Fenwick for her hard work in organizing the event and the volunteers from the Putnam County Senior Center for an excellent meal.

Having already recognized party officers and elected officials (and with no elections on the slate in 2013) there was nothing more to do but let everyone enjoy a beautiful Sunday afternoon.

"That's the shortest Lincoln Day we've ever had," Ensor said.