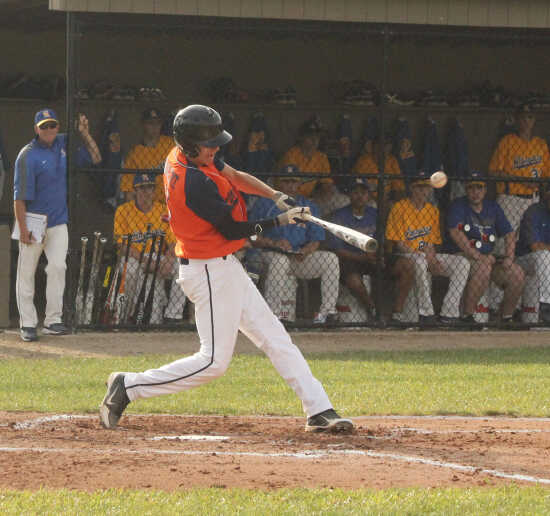 North Putnam junior Jordan Nauert hits an RBI-double in the top of the second inning. Nauert finished the game 2-for-3 with a walk and a run scored. (Banner Graphic/GRANT WIEMAN)
Order this photo

CRAWFORDSVILLE -- North Putnam had already beaten Class 3A No. 6 Crawfordsville once this season. In order to win IHSAA Sectional Class 3A Sectional No. 25, they'd have to do it a second time.

They had a chance, but seemingly no matter what the Cougars did in an inning, the Athenians answered each blow with a bigger one en route to a 12-7 win and their eighth straight sectional title.

It was a hard game for the WCC champions to stomach and head coach Phil Webster was as gutted as any member of the squad.

"It's hard for me and for the team," Webster said. "We had high expectations but Crawfordsville played well and they deserve it and hopefully they win the state championships."

North Putnam got on the board to open the game after senior Michael Herrmann reached on a single and an error.

Senior Jake Haste doubled to right field to drive Herrmann around for an early 1-0 lead.

Senior Kyler Badten, however, could not make the lead last past the bottom half of the inning as the starting pitcher surrendered three runs on a single, a hit batsman, two walks and a wild pitch.

The Cougars got one run back in the top of the second with junior Beau Green's leadoff single and stolen base paying off on junior Jordan Nauert's double to deep left field.

Crawfordsville tacked on a run in the bottom of the third after a walk, a bunt single and a throwing error moved runners to second and third.

Haste, who pitched seven innings in Monday's win against Lebanon, replaced Badten and recorded a strike out before Chandler Pursell executed a suicide squeeze to push a run across for a 4-2 lead.

Another Crawfordsville run came in the bottom of the fourth inning off an error, a sac bunt and a single by Cam Monroe.

Webster said that a lot of the in-game strategy was dictated by the Cougars allowing the first batter in an inning to reach base.

"They're a very good team," Webster said. "They bunt well and we played right into their hands. It was going to be a small ball versus big ball game. We don't bunt and we go for the big hits.

"Our problem today was that we walked leadoff hitters, we hit batters and we made errors," Webster added. "I think we only got the leadoff hitter out twice."

The first hitter reached base in five of the Athenians' six trips to the plate.

North Putnam got a run back in a confusing fifth inning of play.

Senior Morgan Hensley walked to lead off the inning and, after a Badten single and a fly out by Brody Perrine, Herrmann hit a shot to the second baseman that was bobbled repeatedly, allowing Hensley to score.

The miscue knocked Pursell off the mound as the Athenians brought in Conner Smith to pitch.

Smith induced a grounder that saw Badten tagged out but Herrmann safe at second base, with neither side happy about the out runner or the safe call.

Crawfordsville got the run back yet again but did so without registering a hit in the bottom of the inning.

A pair of leadoff walks saw Green take to the mound. The Athenians laid down a pair of sacrifice bunts to score to restore the three-run lead at 6-3.

On the second, Green fielded the ball, checked the runner at third, then picked up the out at first. Pursell took off for the plate on the throw, and Nauert fired a strike to catcher Kaleb Belcher, who appeared to tag the runner before he crossed the plate. 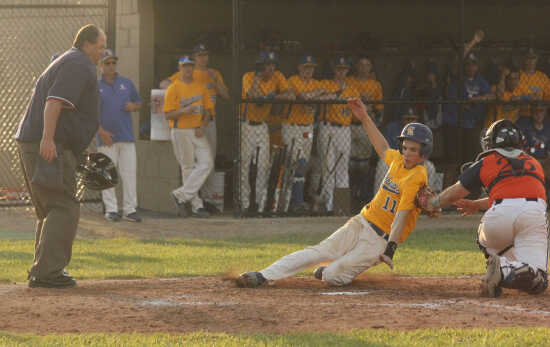 North Putnam's Kaleb Belcher (26) appears to apply a tag on Crawfordsville's Chandler Pursell before he can safely cross home plate. The Cougars scored three runs in the top of the next inning to tie the game, but potentially could have taken the lead. (Banner Graphic/GRANT WIEMAN)
Order this photo

The Cougars responded with their first multi-run inning in the top of the sixth.

Smith walked Green to start the inning and promptly gave up a single to Nauert and two run-scoring hits to Jeter and Hensley before being pulled for Pursell.

Badten singled to tie the game at 6-6 but the Cougars could not add on after a pair of groundouts and a strike out ended the threat.

It was a missed chance for the Cougars according to Webster.

"There were critical situations where if we get big hits, we could have put pressure on them," Webster said. "We just didn't get the big hits."

The Cougars stranded ten runners in the game.

As if on cue, Crawfordsville responded by playing small ball.

An error on a grounder was followed by a pair of bunt singles. Dane Baldwin then singled to move the Athenians ahead 7-6.

Pursell followed with a double that scored two and Shad Conrad doubled to deep center to push another run across to extend the lead to 10-6.

Perrine injured his ankle on the play by tangling his cleat in the centerfield fence and was replaced by junior Shane Beaman.

Crawfordsville continued to score with a Justus single plating the fifth run of the inning and knocked Green off the mound.

Herrmann took over on the mound and got the next three batters out, though a fielder's choice off the bat of Monroe pushed over the sixth and final run of the inning.

Webster said that if the error to start the inning did not happen, the inning might have been completely different.

"If we could have got the leadoff hitter out, they could not have played that way," Webster said. "For instance, in the sixth inning, we start off with an error.

"Then there's a bunt and another bunt. The bases are loaded and the game's over. If we make that play at second base, they don't get that inning.

"They would have had to hit to get on and they aren't as good hitting as they are at bunting. We beat ourselves in that way."

Jeter hit a sacrifice fly to score Green in the top of the seventh but Badten struck out looking to end the game and the season for the Cougars.

The season ended in disappointing fashion but Webster said the squad had plenty to be proud of over the course of his first season in charge at North Putnam.

"Credit our kids," Webster said. "They were down 6-3 and came back to tie the game at 6-6 and we were right there. We ran out of pitching in the end.

"We had five goals this year: win the county, conference, sectional, win 20 game and be ranked. For all intents and purposes, we made four of the five. That's a pretty good season for any team."

Badten, Herrmann, Haste and Perrine will all continue their baseball careers in college next season. 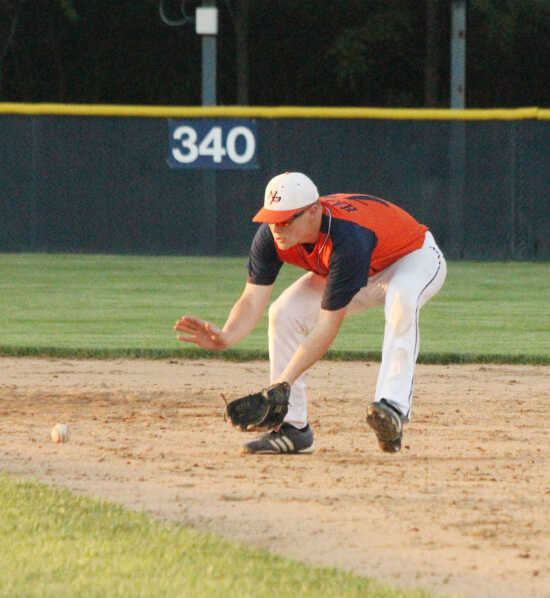 North Putnam senior Jake Haste funnels in a groundball at second base during the game against Crawfordsville on Tuesday. (Banner Graphic/GRANT WIEMAN)
Order this photo