Eagles' Jones is 2013 Putnam County Player of the Year 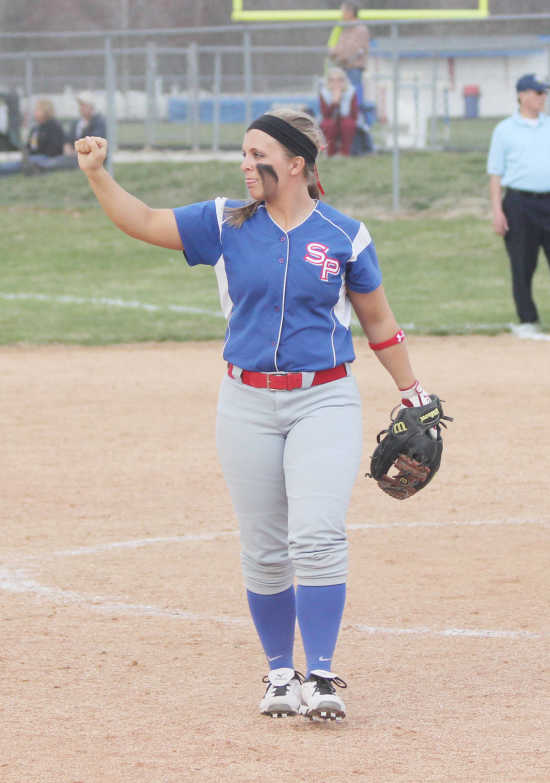 South Putnam senior Jenna Jones emerged as a leader at the plate and in the field for the Eagles this season. Her play earned her the title of Putnam County Player of the Year. (Banner Graphic/GRANT WIEMAN)

The stats for Miami University-bound Jenna Jones are astonishing and speak for themselves: her .636 batting average, 1.091 slugging percentage and 1.766 OPS tell part of the story.

But the recent South Putnam graduate is the 2013 Putnam County Softball Player of the Year for reasons that go well beyond her domination of the opposing pitchers this season. Jones dominated every aspect of the game.

"Opposing coaches don't like having Jenna at third base because she usually gets their bunt signal pretty early on in the game. We've had several coaches have to change it up in the middle of the game. ... What a luxury that is for us."

Chris Jones recently accepted a job to coach varsity boys' basketball at another school and he finished his time with the Eagles in style, leading yet another player to POY honors. Now at Indiana University, Brooke Boetjer won the award each of her four seasons at SPHS.

Jones said she steals signs to give her teammates an advantage, but also to frustrate the opposing coaches.

"If you watch coaches, they tend to do the same thing over and over again," she said. "I just turn around when I'm at third base and I look at them. I stare them down, basically, because I don't care who sees what I'm doing.

"The first time you do a sign, unless it's the only sign you're doing, I'm probably not going to know if you're bunting or stealing or whatever. But through process of elimination, on that second or third time you do it I've pretty much got it down."

The Eagles' star has spent most of her career looking for any advantages she can get. Even after signing her scholarship offer, Jones spent three days per week during the offseason working with her trainer to get ready for the season, skipping out on her senior year on the basketball team.

The intense effort paid off as she set school records in batting average and hit a county-best seven home runs, 32 RBIs and struck out just six times.

Ever the perfectionist, she says she didn't quite master the prep level.

"If I'd mastered it, everything would be perfect across the board," she said. "I just feel in the offseason I've put in a lot of hard work. This is best I've batted ever. The best I batted before this was .400, and that's still good, but it's not this good."

Her strategy at the plate tells the story of a player who is confident in herself and the work she's put in.

"My first I always swing as hard as I can, like swinging out of my shoes," she said. "And that's why a lot of my home runs come off of first-pitch strikes. ... After that I don't really think anything, I just kind of swing. Sometimes I'll sing songs in my head because I'm waiting on the pitcher.

"Typically I sing Beyonce or Rihanna because I really like them. It just kind of gets me pumped."

It's not just that she was crushing the ball. She was also, as they say, "hitting it where they ain't." The county-wide batting average for a ball that landed in the field of play (BABIP) was .400. Jones' was .660.

"My dad (Jason), who is my hitting coach," Jones said, "has always told me that as long as I don't mishit a ball--a pop-fly or a dinky groundball--as long as I hit a ball hard, it's going to be tough for someone to make a play on it.

"I didn't mishit balls very often. I hit them square, where I should. When you hit by pitch location and swing well, good things happen."

Jones had plenty of competition for the county's top honor, with most of it coming from her teammates. Junior catcher Kenzie Trisler's numbers nearly matched the astonishing totals for Jones (.569/.588/1.014).

For both players, going to the plate and merely getting a single meant their slugging percentage actually went down.

"It's been an honor to be able to coach her the past four years. ... It's a great luxury to have as a coach to know that if she's up to bat, good things are going to normally happen," coach Jones said. "She's going to put the ball in play and put some pressure on the defense. And if they try to pitch around her, she'll take that walk and be a threat when she gets on the base path.

"It's a great feeling to have as a coach when she comes up to the plate in any type of situation." 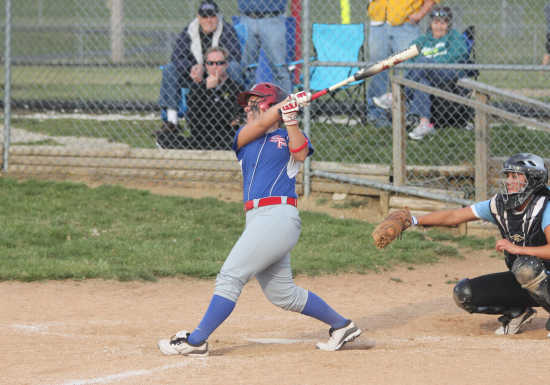 Jenna Jones takes a big swing at the first pitch of an at-bat against Cascade this season. Jones hit .636 with seven home runs for the Eagles. (Banner Graphic/GRANT WIEMAN)

While she clearly has a mastery of high school pitching, Jones does a lot more for her team than just driving in runs.

With several players gone from last season's state championship team, Jones was thrown into a leadership role this year and thrived with the opportunity.

Jones, a third basemen throughout high school, had a new partner on the left side of the infield this year. After playing next to Ball State's Emily Dabkowski for her first three seasons with the Eagles, Jones worked next to freshman Katie Hewitt this season.

"I've always felt like somewhat of a leader just because I like to help people if I can," Jones said. "But taking on that role of being a senior leader and knowing this is my last year so this is 'my team' and the rest of the seniors' team was different."

Hewitt's season was incredible as well--she hit .526/.500/1.205--but her inexperience in the field showed early. Under Jones' wing, she quickly picked up her assignments and became a force for the Eagles' infield.

"I really think Katie got a lot better," coach Jones said, "And I think a lot of that has to do with having Jenna there and the rest of the seniors there to support her."

"I think at the beginning, Katie was really nervous to fill Emily's shoes, because that's big shoes to fill," Jones said. "As time went on, she became more confident and made it her own spot. ... If she ever needed help with anything or seemed frustrated with anything I tried to calm her down and talk her through it; teach her situations.

"We didn't really turn many, if any double plays this year, but I know at the beginning of the year she'd never been taught how to turn a double-play the right way. I worked with her on that. A lot of the girls come work with my dad on hitting, and Katie was there every week working on it.

"She was good to begin with and the little things from me helped."

The vocal leadership was a change for Jones, but she took to it naturally. As class salutatorian she spoke at her schools' graduation. As a softball player, she is constantly talking on the field.

Though she says she's not very comfortable as a public speaker, she is in her element on the field, guiding her teammates and serving as a catalyst for the group's positive attitude and spirit.

"She's great at helping the girls out. When we go to drills, she is one of our leaders," coach Jones said. "A lot of people don't see the behind-the-scenes practice stuff and how much they communicate once they've batted. What the pitcher might be throwing, what the strike zone looks like. Minute little things like that. ... She verbally communicates in a positive manner on learning from our mistakes or a situation when we might have wanted to treat things differently.

"She's been tremendous at that with our younger girls and with our experienced girls."

It seems there is little she can't do on the softball field. Despite standing just 5-foot-1 1/2, she has the versatility to play anywhere on the field. Well, almost anywhere.

"She's been a rock at third base since she was a freshman," coach Jones said. "It's been a big-time luxury to have her there. ... During various seasons we've toyed with the idea of moving her to different positions, because man, she can play almost all of them.

"She can pretty much play all of them except pitcher, and she claims she can pitch. I don't think she's going to pitch in a competitive game, but she might be able to throw it across the plate."

"I tried for the last four years to get him to let me pitch--not even an inning, not even a batter--just one pitch," she said. "I struck my dad out one time, and that's actually an accomplishment because he played college baseball." 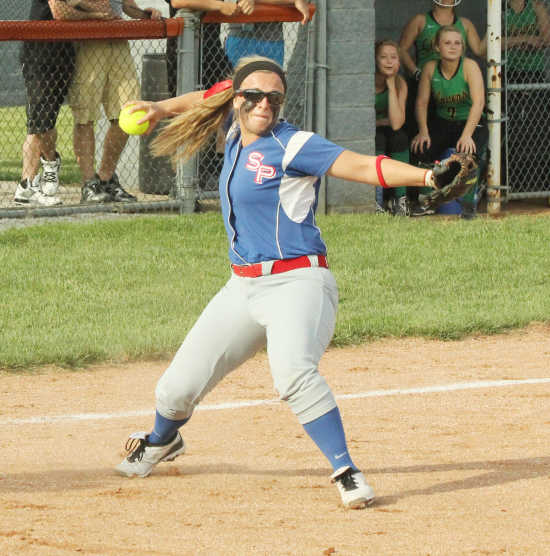 Jones grew up playing travel softball, coached by her father Jason Jones for much of that time. Her teams have reached the top levels of national tournaments and she has received numerous honors.

With the Putnam County POY now in her pocket, she'll move on to the next level to play for Clarisa Crowell's Miami (Ohio) Redhawks.

As her prep and travel career indicate, she'll be a huge success in the Mid American Conference next season.

"She's going to be great," coach Jones said. "They're getting a great player and I know that they're excited about it. I know she's got a lot of options on where they might play her, so that tells you something.

Jones will likely be a utility player for the Redhawks in 2014, which is just fine by her.

"It'll be an adjustment," she said. "But I'm not scared about it. I'm not worried about it. I've talked to girls who were freshmen this past year in college and asked them, 'Is the pitching really that much different than what we see in travel ball?' And they all say no.

With a combination of athletic and academic scholarships, Jones will have a large portion of her tuition covered as she studies sports leadership and management at Miami.

Unprompted, her high school coach insisted that she would make an exceptional coach if she chooses to.

"I think she might want to coach when she's done, and I wouldn't be shocked if she's a very successful coach at whatever level she chooses to do that at," coach Jones said. "She just has that mentality and has that kind of makeup. That comes from her family and how they've brought her up."

Coincidently, or maybe not, she said is hoping to go into coaching once her playing career is finished.

"I want to end up being a college coach," she said. "I just really love my sport and don't want to get away from it. I have fun doing it and it's done a lot for me. It makes me happy."

There is a lot of time--and likely a lot of success--before she reaches that point.