Hauskatz will take the stage on Tuesday to kick off ParkFest for the summer season.

County graduations have all passed. The pool is open. Temperatures have topped 90 degrees. 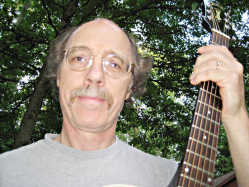 On Tuesday, another mark of summer's return will come to the Bob Flanigan Memorial Bandshell at Robe-Ann Park with the first edition of ParkFest.

For the 20th season, the Greencastle Civic League will present the weekly concerts in the park each Tuesday from June 4-July 30 and again on Aug. 13 and 20.

The first installment at 6:30 p.m. Tuesday will feature Mike Van Rensselaer followed by the Hauskatz.

Mike Van Rensselaer has been entertaining audiences in Putnam County for more than 40 years. He has appeared on stage with the Putnam County Playhouse, performed convocations and conducted workshops at local schools, and sung at festivals, coffee houses, farmers markets, nursing homes and a variety of other venues.

The folk process has also spawned his own writing, which he will perform Tuesday night, singing songs and spinning tales with a distinctively local Putnam County flavor.

His appearance will be his 20th in the Parkfest series, having performed in the band shell at Robe-Ann Park for the first concert back in 1994 and every year since.

The Haukatz are an eclectic group of local musicians playing jazz, rock, blues and more -- classics and standards with a twist and a wink.

Michael says the band does not make a lot of appearances, but when they do there is a sort of kinetic energy.

"We don't play together that often, but when we do, it's a lot of improvisation. And from time to time we throw in something that's recognizable. It's a fun band," the guitarist said.

In addition to the music, there will be food available at the park, provided by the Putnam Inn.

This week's concert is being sponsored by Hammer & Co., Ellen and Bob Sedlack, The National Center for College Costs and Dr. Dale Oliver, DDS.

Concerts for the remainder of June will feature Homebrew Holler and the White Lightning Boys on June 11, Craig Brenner and The Tad Robinson Trio on June 18 and John Bean and The Mongrel Dogs on June 25.