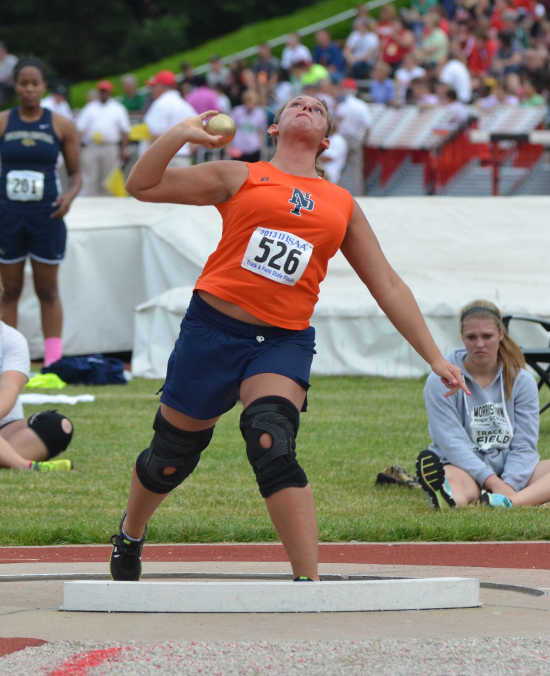 BLOOMINGTON -- After a long, hot morning at North Putnam's commencement, new graduate Samantha Lucas made the trek to Bloomington to compete in the shot put at the Indiana High School Athletic Association track and field state finals and arrived in good spirits.

Completing her high school career and getting a chance to compete in the state finals for the first time on the same day was a thrill, she said, despite finishing below her seed in 23rd place.

Throughout her warm-up and even entering the ring for her first throw, Lucas was all smiles.

A four-time regional qualifier, Lucas said the opportunity to meet--and compete against--the best athletes in the state was a chance she'll never forget and a great way to wrap up her career.

While she was relaxed and loose in her warm-up, she said she got a little nervous when the competition began.

"I saw all these big throwers and thought, 'Oh, gosh,'" she said.

Her first of three tosses was a disappointing 37-3.

"I would have liked to see her move up three or four seeds," NPHS throwing coach Brent McColgin said. "That didn't happen today, but that's how it is."

Lucas came out for her second throw and missed her spot. While the shot went a similar distance, it landed just out of bounds for a scratch.

She had one throw left, knowing she would have to go close to 41 feet, well beyond her career-best, for a chance to advance to the finals and crack the top 10.

With everything she had, Lucas put forth a powerful throw. She added a little distance but again she missed left.

"The focus was just trying to compete with the level of competition that Sam had today," McColgin said. "There's a lot of great talent out there. ... She progressed as the year went on and she's done a fine job this year."

Lucas wrapped up her career as one of the most successful track athletes in the school's history.

Qualifying for the single-class state finals put her among the top 28 shot putters in the state.

With her high school and track career over, she now plans to attend Ivy Tech in the fall and pursue a degree in the medical field.