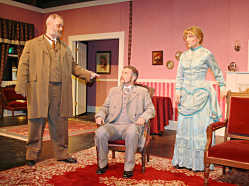 The suspense play best known because of its 1945 film version titled "Gaslight," features Caroline Good as Bella Manningham who seems to being going mad. Her husband Jack is played by TJ Tincher.

Into this household comes a police detective named Rough, played by Tim Good. He knows more about her husband's past than Bella does.

There are also two household servants. Elizabeth the housekeeper is played by Eleanor Howard. Nancy, the cockney maid with romance on her mind, is played by Ashlee Vitz.

Tim played a leading role in "Blithe Spirit" and also directed the PCPH production of "The Importance of Being Earnest." Howard appeared in "See How They Run" and also played Mrs. Paroo in "The Music Man." Vitz played Guenevere in Camelot and was also in "Thoroughly Modern Millie."

Director for the production is Jack Randall Earles. Assistant director is Sandi Rossok.

Assisting on the technical side is Kent Clark. Set painting and decoration are by Linda Gjesvold. Costuming is by Caroline Good.

Corporate sponsor for the show is Rossok & Co. -- Pekin Insurance.