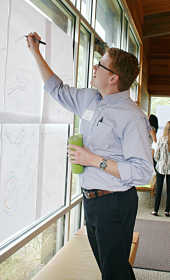 Adding his idea to a display of the city's "potential," Dr. Nick Woodall takes part in the Community Forward Summit Thursday at the Janet Prindle Institute for Ethics.
Order this photo

For more than two years the city of Greencastle has been enjoying the stellar feeling that came with the announcement of $19 million in grant money flowing into the city.

However, with some of the work from the Stellar Communities Grant already completed, other in progress and still other meeting with roadblocks, planning for what comes after is in order.

"The question keeps coming up, 'What comes next?'" Mayor Sue Murray told a gathering of citizens from around the community Thursday.

The participants in the Community Forward 2013 Greencastle Community Summit represented a cross section of leaders from business, government, education, social and civic organizations.

With a subtitle of "Growing a Stellar Community," the four-hour meeting at DePauw's Janet Prindle Institute for Ethics asked participants to take a long look at the city's strengths and weaknesses and how to utilize and address those in continuing to move the community forward in the coming years.

Following brief comments from Mayor Murray and DePauw University president Brian Casey, Greencastle native and executive director of the Indiana Association for Community Economic Development Andy Frazier spoke of moving the city forward after the Stellar program is over.

"How will you use Stellar Community to continue to improve Greencastle?" Frazier asked. "What's next?"

Rather than offering cookie-cutter answers to such questions, Frazier said community economic development is about establishing a set of guidelines by which to improve a community.

Identifying those assets was a big part of the later sessions of the summit. Following Frazier's keynote speech, the summit broke off into five breakout groups moderated by facilitators from Collabo Creative LLC.

The goal of this portion of the program was to identify the city's "SPINE" characteristics, an acronym that stands for strengths, potential, issues, needs and expectations.

Each of the five groups moved through the five characteristics over a period of about two hours. Participants were encouraged to express themselves openly and through different means than might be used at similar gatherings. With large, participant-driven displays at each station, the goal was free, energetic discussions of the community.

The findings and outcomes of these sessions will now be documented by Collabo Creative to be presented at the next Community Forward Summit, set for Thursday, Oct. 3.

Another goal of the second summit is to get even more people involved. At the conclusion of the meeting and in a follow-up email on Friday, Mayor Murray encouraged the participants to think of fellow citizens who were missing from Thursday's table and bring them to the October session.

The mayor's plea harkened back to some of Frazier's comments from earlier in the morning. He said that an important step in community economic development is to take an inventory leaders, which includes citizen leaders in addition to the more formal leaders of organizations, government and business.

From there, leaders across the board must be engaged in conversations like those at Greencastle's community summit.

The failure to build relationships and to adequately engage in the planning and discussion phase is where Frazier said community economic development most often goes wrong.

"Don't shortcut it and assume you have all the answers without talking it out," Frazier said.

Those wanting to talk it out and contribute to those answers are encouraged to attend the Thursday, Oct. 3 Looking Forward summit at the Prindle Institute.