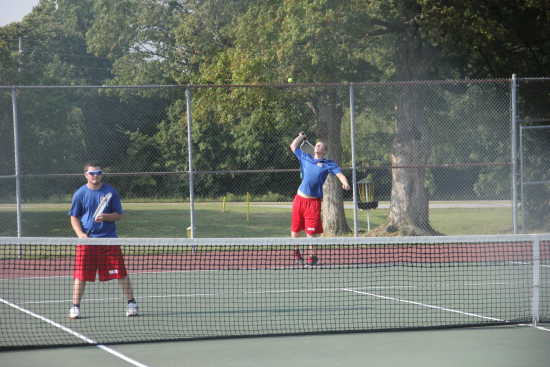 Trey Moore serves for the Eagles as Aaron Cole looks to poach at the net. The pair won their match 4-6, 6-2, 6-3 against Southmont on Monday. (Banner Graphic/GRANT WIEMAN)

Tied at two matches each, the pressure of securing a win for the South Putnam boys' tennis team came down to the recently-promoted No. 2 doubles team of Ben Albright and Mason Sollman.

The pair split the first two sets with their opponents from Southmont, then battled to a 3-3 third before losing 6-4, 6-4, 6-4.

"I think it was pretty impressive that we came back and we were right there at the end," SPHS coach Zach Love said. "We had an opportunity to get a win and we haven't had a lot of those the last couple years. Hopefully we can move beyond moral victories pretty soon and have some more success."

Albright and Sollman won a challenge match last Friday to secure their place in the lineup for South Putnam, then won the first set against Seth Dickerson and Steven Cloncs. A tough second set filled with errors and sloppy play left the team scrambling and it appeared they'd lost the momentum earned in the past week.

After the split the Eagles pair lost the first three games of the final set. Sollman took care of business on his serve, then the duo broke serve to narrow the gap.

With Albright serving to level the set and match, Sollman took over the game from the net. A series of volleys, athletic smashes and rips down tight angles led to a new nickname for the junior: the Masetrix.

The 3-3 game was the final highlight for the duo, which often happens after expelling the energy and emotion required for a comeback.

Getting wins to put that final pair into position to secure a win were No. 3 singles player Josh Stewart, who beat Justin Lowe 6-0, 6-1, and the No. 1 doubles pair or Trey Moore and Aaron Cole.

Moore and Cole were playing together for the first time this season and lost the first set as they tried to find a rhythm, then dominated the final two. They won 4-6, 6-2, 6-3.

"I don't know that that puzzle is quite solved yet. We've still got some more shifting around to do, but we took a step closer today."

Moore, at 6-foot-3, and Cole have games that complement one another and could develop into a challenging pair going forward.

South Putnam had a pair of matches dropped this week due to scheduling conflicts and the team will return to action Monday at Danville at 5 p.m. 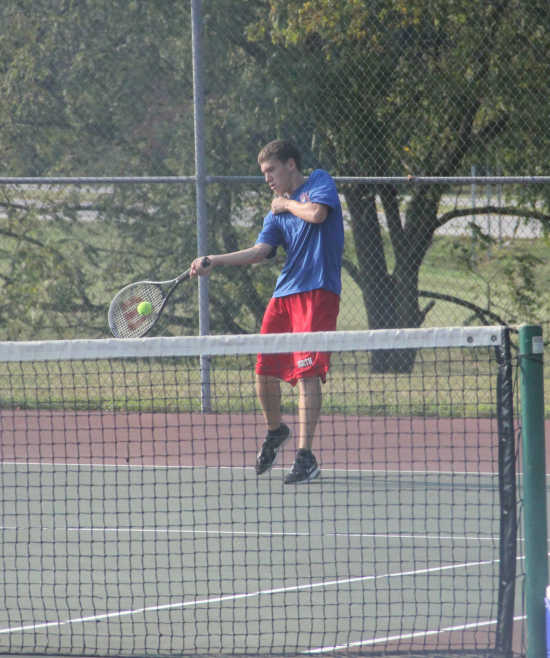 A winner at No. 3 singles, South Putnam's Josh Stewart rips a forehand winner during his match on Monday against Southmont. Stewart and the Eagles lost 3-2. (Banner Graphic/GRANT WIEMAN)