A 31-year-old Putnam County man will live the rest of his life on the sex offender list and the next several years in the Indiana Department of Correction after his sentencing Thursday in Putnam Circuit Court.

Michael Kenneth Scales, Greencastle, who originally faced nine felony counts involving sexual relations with an underage Greencastle girl, agreed to a plea agreement with the Putnam County Prosecutor's Office in which he pled guilty to four of the charges.

Scales, who had been facing a maximum of 276 years in prison and $90,000 in fines if he were found guilty on all nine felonies, pled guilty to the four charges that reportedly occurred when the victim was 15 or 16 years old.

In return for those guilty pleas, the state agreed to dismiss five child-molesting counts -- four Class A felonies and one Class C felony -- in which the state would have had to prove the victim was under the age of 14. 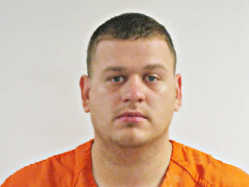 Putnam Circuit Court Judge Matthew Headley accepted the plea agreement, which sentenced Scales to 18 years in the Indiana DOC on each of the three Class B felonies and two years suspended. The 18-year counts would all run concurrently, the agreement stipulated.

On the Class C felony count, Scales received eight years, also to run concurrent to the other counts.

A previous no-contact order issued in the case remains in effect as a term of his sentence.

Scales must also register as a lifetime sex offender.

"Due to the nature of the crime, he is a sexually violent predator," Judge Headley said.

Also dismissed as a part of the plea arrangement was a misdemeanor charge of invasion of privacy incurred after the no-contact order was issued.

The offenses that produced the nine original charges filed last January all reportedly occurred between Jan. 18, 2010 and Dec. 20, 2012.

The four counts of sexual misconduct to which Scales pled guilty involved intercourse, oral sex or alleged fondling or touching with the intent to arouse himself or the victim.

The situation came to light on Jan. 4, 2013 when City Police Officer Eric Vaughan went to Scales' Greencastle residence at 12:01 a.m. on a reported domestic disturbance and sexual assault call.

In his original statement included in the probable cause affidavit, Scales initially denied all sexual contact with the girl before admitting to having sex with her "just one time on Dec. 20, 2012."

Under further interrogation, Scales admitted to kissing, flirting, fondling, oral sex and intercourse occurring at a Castlebury apartment, a mobile home and his residence.

Scales, who was employed as a guard at the Putnamville Correctional Facility at the time of his arrest, was being held at the Putnam County Jail. He will now be transferred to a DOC facility.