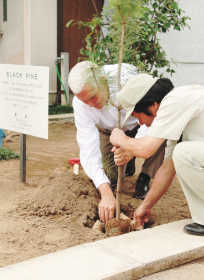 OTA CITY, Japan -- On the fifth day of his jobs trip to Japan, Indiana Gov. Mike Pence met with executives from Shigeru Co. Ltd., the parent company of Heartland Automotive based in Greencastle.

Shigeru established its Greencastle location in 1987 as its American headquarters, manufacturing dashboard assemblies for Subaru. It has grown to also include production for the Camry line at Subaru of Indiana (SIA).

Shigeru executives and Gov. Pence discussed expansion plans the company is expected to announce in the near future that could create hundreds of new jobs for Hoosiers at its Lafayette facility.

To commemorate Shigeru's 26 years of Hoosier roots, Pence planted a tree next to the tulip poplar (Indiana's state tree) that former Gov. Robert Orr planted in 1987 on the company's Ota campus.

"Today we planted a symbolic tree at Shigeru, a company with rich Hoosier heritage dating more than 25 years," Pence said. "The tree represents the strength of Indiana's deep relationship with this company, a bond that has created hundreds of good jobs for Hoosiers. Just like this tree will grow, we are committed to continuing to cultivate and grow our strong friendship and economic ties with Shigeru in the years ahead."

Pence also met in Ota City with officials from TOA Industries, which has a manufacturing facility in Mooresville.

Pence spent the fifth day of his jobs trip to Japan on the road thanking Indiana's current customers for their investments in Indiana.

He traveled northwest of Tokyo by train to Ota City, Lafayette's sister city, to visit the headquarters of Subaru, the automotive division of Fuji Heavy Industries.

"Thousands of hardworking Hoosiers have jobs today because of Subaru's commitment to Indiana," Pence said. "On this trade mission, I've made it a top priority to personally thank Japanese companies for choosing Indiana out of a world of options.

"With our favorable business environment and a workforce highly skilled in advanced manufacturing, Subaru executives have noticed that Indiana is a state that works for business," he added.

The governor toured Subaru's Japanese facilities and joined its leadership for lunch where the group discussed its recently announced hiring plans. In May, Subaru of Indiana announced plans to invest $450 million to build the Impreza at its Lafayette plant, creating up to 900 new jobs by the end of 2016.

SIA, which employs more than 3,600 associates in Lafayette, operates the country's first zero-landfill automobile factory. Ninety-nine percent of the plant's waste is recycled while the remaining one percent is converted into electricity.

Meanwhile, in speaking to the 45th annual joint meeting of the Midwest U.S.-Japan Association and Japan-Midwest U.S. Association earlier in the week, Gov. Pence expressed Indiana's commitment to strengthening ties with Japan.

"I am here today to renew Indiana's relationship with Japan," the governor said. "Our state's future looks bright, and we look forward to seeing the entire state -- families and businesses, both homegrown and from afar -- succeed.

"We hope more and more Japanese firms will be able to leverage Indiana's favorable business environment, convenient location and strong workforce to grow and expand in the coming years."

Pence recognized Indiana's conference delegation, the largest state delegation in attendance at the conference, consisting of three mayors and community and business leaders from across Indiana. He also discussed Indiana's attractive business environment and expressed gratitude for Japanese companies' continued investment in the Hoosier State.

"We are grateful that so many Japanese companies have chosen to build their homes in Indiana," Pence said. "Our work continues to ensure we remain the destination of choice for our extraordinary Japanese business partners."