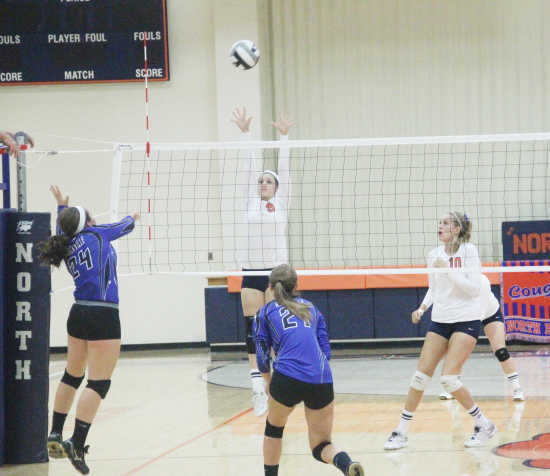 ROACHDALE -- Down 15-14 in the pivotal fifth set, one point from a loss and three from a victory, the North Putnam volleyball team was returning serve for it life.

After a brief rally, junior Kaitlin Mindiola pushed a set over the net down the line. The line judge ruled it out, then in, giving the Cougars new life. The team went on to lose the final set, 24-22, but clutch play from Mindiola helped give the team a glimpse of success as it heads toward the Putnam County Tournament this weekend.

"I'm proud of how hard we fought tonight," NPHS coach Brandy Dickson said. "From now on we forget today and move on to Saturday, and that's what our focus will be on at practice tomorrow."

The Cougars were inches in or inches out for most of the day, without enough consistency to string together points or deliver many game-changing plays.

Junior Shay Lucas strung together a rally to close out the first set, a 25-17 win for the Cougars, and senior Madi Asbell had five points during the 28-26 third-set win, but North Putnam didn't win more than three straight service points during any other stretch.

"We struggled at times to make big plays when we needed to," Dickson said. "We sent some tick-tacky stuff over the net ... when we should have put the ball away. We were being too careful.

"One of the things we talked about in the locker room is that we just have to terminate the play as soon as possible."

NPHS tightened its rotation as the match went along with Mindiola and senior Madison Harris getting extended run at the night, trying to defend against Rockville's star hitters DonaMarie Kelley and Meagan White.

The pair caused problems throughout the match, but Mindiola's blocking ability helped keep the ball in play.

"Kaitlin is one of the best blockers on our team, and that's why I have her playing opposite (White)," Dickson said. "(White) is one of the few girls that we've seen this year that can hit line and (Kaitlin) did a good job of taking that away.

"Kaitlin makes big plays when we need them and she's very pinnacle to our serve-receive game and our blocking."

The Cougars lost sets two and four 25-15 and 25-17, relative blowouts giving the tight match in other sets, but recovered to exert their abilities each time.

The team facing the south, and the Cougars' large cheer block, lost each of the first four sets which worked in North Putnam's favor to start the final game.

Asbell gave the Cougars and early 6-3 lead, later extended to 10-6 on an ace from sophomore Taylor Nauert. Junior Morgan Sanford served up 14-13 with a chance to close out the match but White ripped a spike to level the score.

The Cougars missed a chance to get the ball for point-game on a shot down the line that was called out, then Mindiola leveled the score.

Asbell and sophomore Raegan Bowling and Sanford each had a serve with a chance to close out the match, but neither was able to finish the Rox off.

An ace by Rockville freshman Bailey Vukovits and an error from the Cougars finished off the match.

"I'll trade that loss for a win this weekend, no problem," she said. "If we fight as hard as we did today, we'll do fine on Saturday."

North Putnam hosts the Putnam County Tournament and kicks things off against South Putnam at 9 a.m.