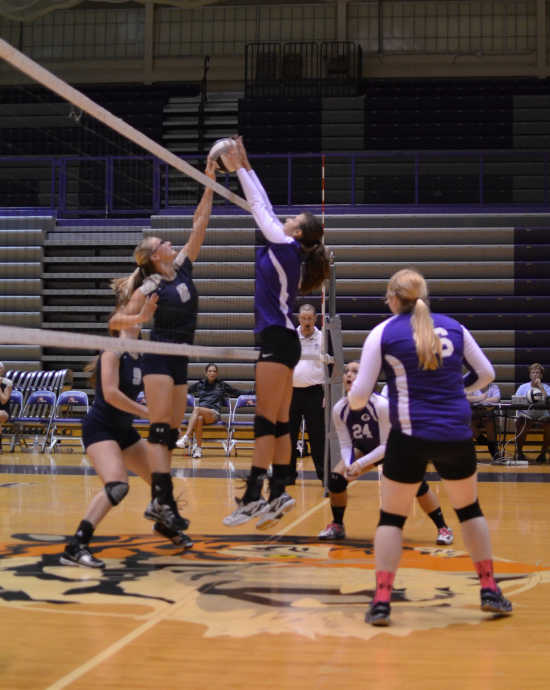 Greencastle's volleyball squad got a second crack at a Sagamore Conference foe when Tri-West came to McAnally Center Thursday night.

Having lost to North Montgomery the night before, the Tiger Cubs did not allow the Bruins a chance to inflict a second loss in a row, winning 25-16, 27-25 and 26-24 in the last match before the Putnam County Tournament.

The hosts took the first set relatively comfortably, shooting out to an 8-3 lead that grew to double digits at 15-5.

With the visitors struggling to establish their own offense, Greencastle powered through the Bruin defense to claim the first set.

It was at this point, however, that the flow of the match turned into a choppy, give-and-take affair. Tiger Cub head coach Maggie Walters said the Bruins kept plays alive more often than the squad was prepared for.

"They came out strong and got a lot more touches than we were expecting," Walters said. "Our hitters weren't getting the big kills they're used to getting. They had to start hitting their shots as the match went on."

Tri-West briefly led early in the second set at 5-2, only to watch GHS take seven of the next eight points and earn a 9-6 lead.

The Tiger Cubs seemed to be in command of the set at 14-8 but the Bruins slowly chipped away at the lead.

The visitors tied the set at 19-19, took the lead on the next serve and seemed poised to tie the match.

But Tri-West could not find a way to get the vital point needed and the home side eventually rallied to grab a 26-25 lead and took the set after the Bruins hit wide on the next point.

Set three was even more tense as the largest lead of the set was four points, once for the visitors at 10-6 and once for the hosts at 19-15.

Another late rally from the Bruins threatened to send the match into a fourth set with Tri-West leading 24-23. Three straight points for Greencastle was enough to turn the score around and seal the match 3-0.

Walters felt that if the squad cut down on mistakes that the second and third set would have more closely mirrored the first.

"We started making errors in the second and third sets, which is why we couldn't keep our leads," Walters said. "We kept hitting balls out and Tri-West got runs on us.

"We shouldn't have made as many errors as we did in the second and third sets. If we don't make as many errors, we could beat Tri-West by more than what we did today if we play again."

Greencastle's draw for Saturday mean that the Tiger Cubs will be facing Cloverdale for the second time this season. Walters said the squad had to be ready for another grueling match but said the group was ready to make an impact.

"We need to improve our serving against Cloverdale," Walters said. "Last week, we missed a lot of serves. We've also got to hit smart. Cloverdale has a great defense and we have to work on hitting shots on the floor.

"They're going to come out fighting. We beat them the first time and so we have to be prepared for that. If they play their game and don't make errors, they can win county."

Next Match: Greencastle plays Cloverdale in the second match of the Putnam County Tournament Saturday at North Putnam High School.