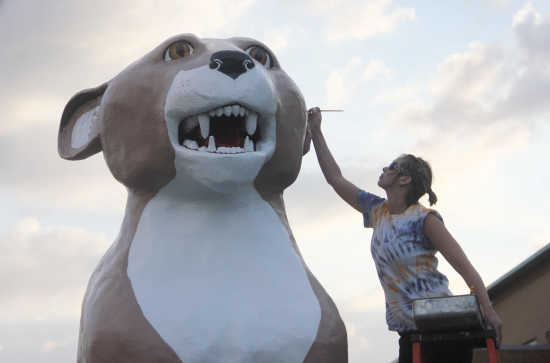 ROACHDALE -- North Putnam fans will be greeted by a slightly more-terrifying giant Cougar monument when they arrive at the game against South Putnam on Friday night.

High school art teacher Brittney Nees, along with several interns and volunteers, have spent the past few days patching, painting and redesigning the unique statue that sits perched behind North Putnam Middle School.

"It represents the school's image, so we want it to reflect our standards," Nees said.

The statue was donated to North Putnam several years ago by a car dealership in Indianapolis. There were only 14 Cougar statues made, part of the Mercury Cougar promotion.

The monument was pushed aside a bit for the past few years, so much so that Nees said she barely noticed it during her first year at the school, but it was brought back to the forefront this summer after the school made improvements to its parking lot and athletic facilities.

The fiberglass Cougar was in a state of disrepair, with holes, cracks and the tail disconnected. Superintendent Dan Noel noticed the problems and charged Nees with fixing it up.

Cartoonish by nature, Nees and art interns spent the past couple days painting the jumbo kitty, hoping to turn the comical kitten into an intimidating cat. The eyes have been changed from benign-blue to a more life-like brown (Nees made sure by checking out pictures of real Cougars), and the mouth is now blood red.

While the restorations have stopped temporarily, Nees said she plans to continue working on the Cougar until it looks as lifelike -- and intimidating -- as possible. This includes adding texture to the fiberglass fur and redesigning the nose, a massive undertaking given that it's the largest piece Nees said she has ever worked on.

There are also hopes -- maybe dreams -- of one day turning the statue in a smoke-breathing growler that activates on Cougars' touchdowns.

For now the NPHS faithful will have to settle for a refurbished monster the silently greets them on their way into the NPHS sports park.

And as for the rumors that there will be a faux-dead eagle hanging from the mouth of the beast when guests arrive for Friday's game?

Those are just rumors, Nees says. But she wants guests to arrive early, just to be sure.