Last call for Hoods and Capers 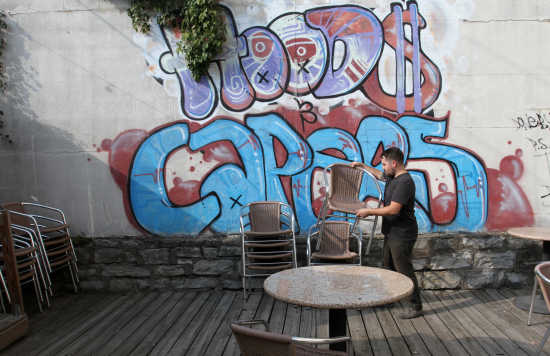 After more than three years of business Hoods and Capers has had its last call as its owners move on to pursue other interests. Co-owner Ryan Gullett begins the task of cleaning up the bar and restaurant on Wednesday evening, stacking up the patio furniture one last time.

Greencastle lost another business downtown this past weekend as Hoods and Capers closed its doors for good Saturday evening after more than three years as its owners pursue other interests.

Owners Ryan Gullett, Zach Stewart and Brian Barnes first opened their doors at 18 S. Jackson St. in April of 2010 and quickly became a staple in the Greencastle bar scene.

"We started our business based off of the fact that two of us, Brian and I from Greencastle, had no place really to go when we came home," Stewart said. "So, we decided, hey, why don't we open up our own place. We just wanted to do it and provide Greencastle with something it was lacking."

Owning a bar was something the group had always dreamed of doing. Making it a reality fell into place quickly following the closing of The Cavern Club, which had occupied the space prior to Hoods and Capers.

"We got the business at a great deal, had DePauw University right there and only four other bars in the entire town to compete with," Barnes explained.

"So we pretty much saw the opportunity as minimal risk and decided to jump into it. I'm sure at least one point everyone that's been in a bar has probably thought how cool it would be to own one. So I guess with that being said, we all kind of wanted to live a deep-down fun fantasy of ours."

Both Stewart and Gullett had worked at The Cavern Club prior to its closing, but none of them had ever owned their own bar. With the support of their families and friends however, they pursued their dream.

"Did we know what we were doing when we first started out? No, I don't think anyone knows what they are doing completely when they first open a business," Stewart explained. "A lot of folks in town said a lot of discouraging things about us when we first opened. We were told everything from 'you're too young' to 'you won't last six months' or 'all they do is serve minors,' all of which were comments that were made by people that never stepped down to Hoods in the years we were open. However, we weren't dumb, we were determined to succeed and we were aware of the risks involved."

Opening in 2010, all three were around age 24, which to some seemed young, but it was the age of the clientele they were trying to appeal to, and it worked in their favor.

"The first night we opened we had a line out the door, up the stairs, down the sidewalk and down West Walnut," Stewart said. "From that day forward -- it didn't really slow down. I think we appealed to the majority, and I think the majority happens to be the demographic that actually goes to bars."

Their young age helped draw not only DePauw students down to Hoods and Capers on a weekly basis, packing the place on Wednesday nights for $1 drink night as well as the weekends, but locals as well.

With both Barnes and Stewart being Greencastle natives, the group wanted to make an impact in Greencastle not only for DePauw students, but also within the town itself by helping bridge the gap between students and the community.

Over the years, the group helped their friends when they needed it and their friends helped return the favor, such as Ryan Young, Ben Neely and Tommy Stevens, who helped run the bar these past few months, or Justin Eiteljorge, who created the entire Hoods menu and helped developed the well known homemade pizza and from scratch wing sauces that were made with beer or liquor.

"It was a real life 'Cheers.' It's a family," Gullett said. "You could come down, grab a drink, talk to the person next to you and over time everybody knows your name." 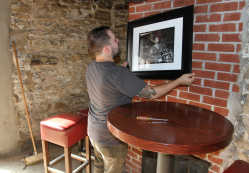 Co-owner Ryan Gullet begins the task of removing some of the photographs that lined the walls.

"What we did is bigger than bank accounts, bigger than egos, and bigger than small-town gossip. We did the impossible -- we brought together people from every walk of life and made them feel welcome. We didn't care if you rolled up in your chariot of gold, or if you walked in wearing the only clothes your had. The bottom line was you were welcome and treated like everyone else," Barnes said. "Really for the first time I think that, as dumb as it sounds, locals weren't afraid to go where DePauw students were -- and vice versa."

Although Barnes, Stewart and Gullett have already moved to various areas across the country -- Barnes is now a professor in Boston, Stewart moved to Iowa and Gullett up to Indianapolis -- each has his own memories.

"We're closing partially because with Zach and Brian gone and with me operating by myself I've wanted to sell for a while. After the slow summer, the timing was right," Gullett said. "I'll miss all the people that came down and made this place what it is. I'm going to miss the environment. It's a cool spot with the rock walls, the tin roof and the patio, but all good things must come to an end."

The group made one thing clear, they weren't closing for financial reasons; they were closing because it was time to move and begin a new chapter in each of their lives.

"I think every business that has been down in that location, regardless of their lifespan are deemed failures because they closed. Hoods wasn't a failure. We could remain open if we wanted to. We just never intended on being open for forever, it's simply a chapter of each of our personal lives," Stewart said. "People appreciated that the owners were the bartenders, the ones making your food, etc. and now that we're doing other things in our lives, we want to pass it on to someone that can hopefully provide the same vibe."

So, as Barnes, Stewart and Gullett close this chapter, they hope to be remembered in Greencastle for creating one of the most welcoming environments for people of all walks of life.

"I'd love for it to still be a DePauw/local bar, but I think that's a task that's pretty hard to do," Gullett explained. "I think people have often failed at it and we just got really lucky that we had a place that we could do that. If anything could live on I'd like a place where everyone could just come, drink and be merry."