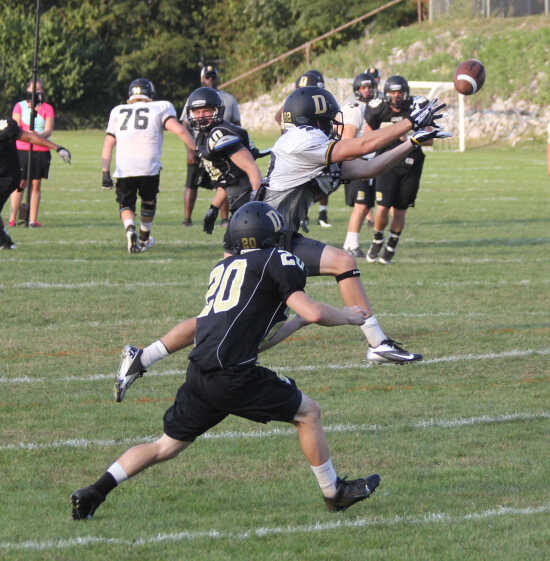 When the DePauw football team takes the field for it's home-opener on Saturday, it'll be a familiar opponent to first-year coach Bill Lynch.

A quarterback at Butler in his playing days, Lynch knows Wittenberg very well.

"I can go all the way back to playing college football against Wittenberg," he said. "I coached against them in the 70s and 80s, and they've always been great, so we know what we're going to get."

Wittenberg (0-1, 0-0 NCAC) opened it's season two weeks ago against Butler, Lynch's alma mater and the school he has worked at prior to taking the DePauw job last December.

While he said that connection didn't give him any specific scouting advantage, it does allow him a basis for comparison for Wittenberg's talent and speed. The Bulldogs beat WU 49-24.

"Having spent two years at Butler, I know how good (the Bulldogs) are right now," Lynch said. "(Wittenberg) really did all the things they wanted to do as the game kind of settled down. ... We're going to get a well-coached, very sound team that's got a lot of skill and is very physical, so we're going to have to raise our level of play."

The host Tigers will have their work cut out for them. DPU lost last season's game 52-14 and Wittenberg returns starting quarterback Reed Florence.

The senior threw for 298 yards in the week-one loss, a game which Wittenberg ran an astonishing 83 offensive plays. For comparison, Butler had 62 plays and DePauw, in it's opening loss at Sewanee, ran 64 plays.

That pace was partly because of their match-up, Lynch said, but DPU threw in a few extra sprints during its bye week to help prepare for a potentially breathtaking pace.

Without a game last week, the DePauw players are starting to get anxious to get back into action, evident during a few chippy plays during Wednesday's practice.

Because Thursday and Friday will be pad-free walkthroughs, the Tigers may also have wanted to get a few extra reps at getting their licks in during their final chance of the week.

"They're ready to play again," Lynch said. "To go through the whole preseason, have a disappointing loss and then you've got to wait two weeks to play (was tough)."

DePauw's game on Saturday is not just the home opener for Lynch, but also the first game the team has played on the newly-renovated Blackstock Stadium turf.

Even without a tough, conference opponent coming in, the game would be exciting.

"We're anxious to go," Lynch said. "These kids work hard year round, and certainly since we came here in camp. They're proud of the new stadium, the new turf and what's going on here.

"They're anxious to be able to play a home game."

NOTES: The only change on the offensive depth chart from the Sewanee game is junior Chad Hale taking over as the starting left guard ... last year's starting safety and punter Paul Simon remains out of action ... freshman quarterback Matt Hunt took additional reps at practice on Wednesday. Justin Murray is entrenched as the starter but the backup situation may be in flux. ... Murray led the team with 15 carries and 35 rush yards against Sewanee, with Amen Galley (7-22) and Armani Cato (8-31) splitting reps at running back. The ground game looked improved from last year, but DePauw will need to establish it early in order to keep the Wittenberg offense off the field. ... DPU had a minus-three turnover differential against Sewanee, Wittenberg was minus-one against Butler.