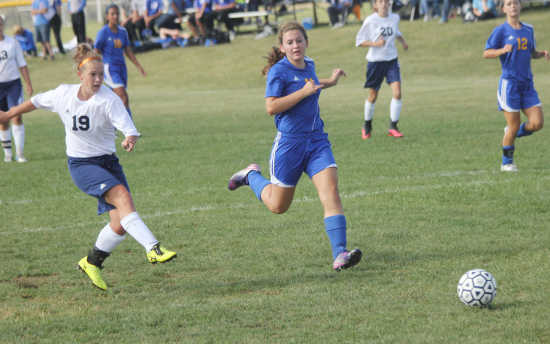 ROACHDALE -- The North Putnam girls' soccer team had moments of brilliance against visiting Crawfordsville on Saturday, but the flashes were overshined by the consistent play of the Athenians in the 7-2 loss.

The Cougars started the game playing well, but they wore down as the day went along.

Freshman Kaelynn Abner had a goal and an assist for the Cougars, but Crawfordsville Hannah Whicker stole the show with four goals.

"I pulled the girls in this morning and told the girls, 'She is their leading scorer. She has almost all their goals,'" NPHS coach Willie Gaskins said. "I just told the girls we can't let (Whicker) in there, and when she does get in what I call the Golden Zone, she has to be marked up at all times."

The Golden Zone, Gaskins said, is the area enclosed by the 18-yard box and six-yard box where the highest-percentage of shots find the back of the net.

Whicker opened the scoring 12 minutes into the game with a header that got past NPHS sophomore goalkeeper Claire Sims. She assisted the next goal, then scored two more herself to give Crawfordsville a 4-0 lead.

Abner's goal came with 1:34 left in the first half.

Freshman Christa McRoy lobbed a direct kick over a wall of Athenians that Abner raced down in the open field. Outrunning the entire Crawfordsville defense, Abner ribbed a goal past the Athenians' keeper to get NPHS on the board just before the half.

Whicker took the momentum right back four minutes after the break, then scored her fourth goal five minutes later.

Abner assisted on a goal by senior Rebecca Booth with 8:23 remaining, but the versatile, instinctive freshman's efforts weren't enough.

Gaskins said Abner has started to become a leader for his squad, despite her lack of varsity experience.

"When Kaelynn plays, she bring a lot of experience and leadership on the field, even as a young freshman," he said. "She always puts everything out there when she plays.

"She plays phenomenal 99 percent of the time and she doesn't let anybody get her down. ... She really became kind of a mentor to even some of our older players to show that everyone can play up that level of ability and skill that she plays with."

North Putnam continues its season on Monday when it hosts Western Boone at 5 p.m.