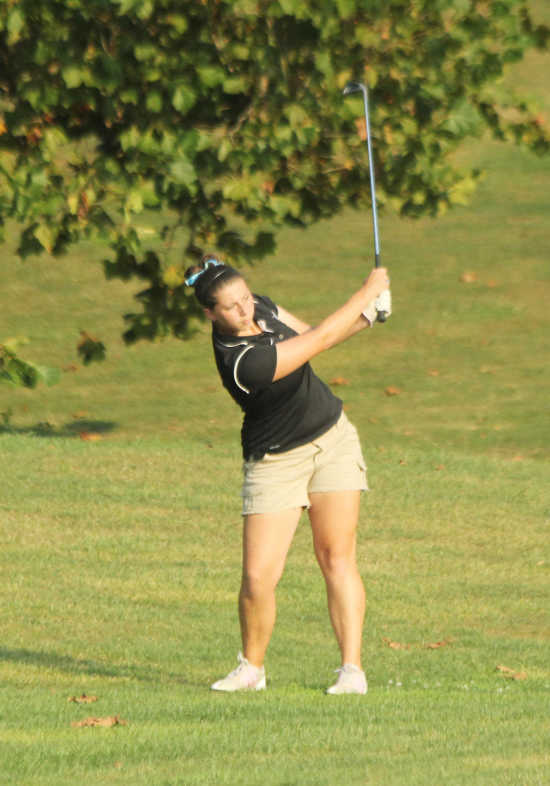 Cloverdale senior Elizabeth Wardlow hits a shot from the fairway during a tournament earlier this season. (Banner Graphic/GRANT WIEMAN)
Order this photo

Cloverdale finished fifth overall in the team standings with a strong round of 403, Greencastle finished sixth with a 429 and South Putnam eighth at 460.

Coaching the Clovers on Saturday was Doug Wokoun, the CHS boys' coach who filled in for girls' head coach Matthew Langdon. 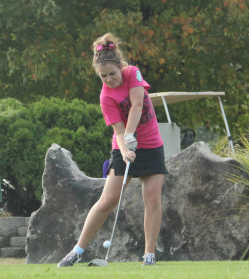 "Matthew has done a great job with these girls and they've built up at the right time," Wokoun said. "They all came together and played very, very well today."

Sophomore Harlee Fuetter led CHS with a round of 90, enough for the second-highest score for an individual on a non-qualifying team to qualify her for Saturday's regional.

Senior MaKayla Moore finished at 95, one stroke from qualifying herself. Other scores from the Clovers included 101 from junior Anna Spencer, 117 from freshman Abbie Speas and 121 from senior Elizabeth Wardlow.

Fuetter's round was an 18-hole career-best and the rounds from Spencer and Speas both included a nine-hole personal best.

Northview's Kiersten Mikesell earned medalist honors with a round of 84, followed by Terre Haute North's Megan Ramer on 87 and South Vermillion's Tori Vitaniemi's 88.

Cloverdale opened its round on the back nine. Wokoun said getting the more difficult half of the course in early played into Cloverdale's hands.

"It was an advantage for them to play the back nine first because it is a little bit tougher from the ladies' tees and the girls had to fight their way through some things," Wokoun said. "When they got to the front, which was a little easier, they were in the grove of things. They started hitting shots, got excited and that carried on through."

Greencastle finished sixth behind the Clovers, led by junior Lauren Bridgewater's 97. Senior Liz Johnson finished with a 102, followed by sophomore Lokysa Scheuermann at 105, freshman Alexa Newlin with 125 and freshman Alex Weliever at 144.

"We were a little disappointed that our top three girls didn't play a little better," GHS head coach Bob Hedge said. "We thought we might be able to advance as individuals, but all-in-all it was a very good season with a conference win and coming so close in the county tourney."

Hedge said he was also pleased with the season of his lone senior, Liz Johnson.

"I am very proud of Liz," he said. "Winning the county in her senior year, especially doing it in a playoff."

South Putnam co-head coach Gloria Curtis said that the round highlighted some of the strengths and weaknesses of the squad this season.

"I thought they played well," Curtis said. "I think they stayed where they have been all year. They have improved some and I think it's been a pretty good year for us.

"I think we held our own pretty well. We've had some highs and some lows. Some shot around average and some shot under where they had been. It was a hard year for them but all in all, it's been a good year.

"(Coaching) has been very enjoyable. It's been a blessing to be able to do this."

Next Match: Fuetter will take part in the IHSAA Girls' Golf Regional at Smock Golf Course in Greenwood next Saturday.