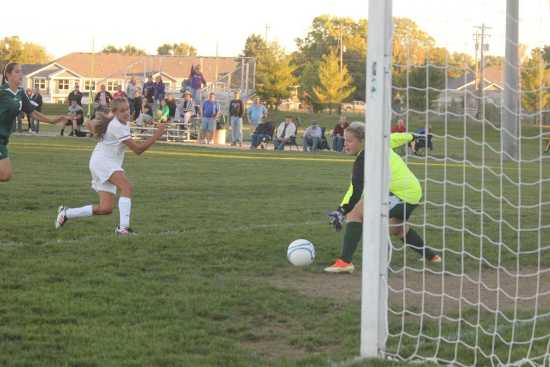 Greencastle freshman Grace Smith sneaks a shot past the Monrovia goalkeeper in the second half on Monday. (Banner Graphic/GRANT WIEMAN)

Freshman Grace Smith scored a go-ahead goal early in the second half and the Greencastle girls' soccer team held on to the lead to secure a 2-1 win against West Central Conference rival Monrovia on Monday.

It was Smith's first goal since being sidelined early in the season with an injury and GHS head coach Jamie Grivas said it was a great asset to the Tiger Cubs' lineup.

"It's nice to have her back," Grivas said. "She really has that fighting, wants-to-finish-it attitude."

Smith's goal came off an assist from freshman Whitney Weinschenk, who played one of the best games of her career as well, Grivas said.

Less than five minutes into the second half Weinschenk won a battle for the ball near the right sideline at midfield, then fed it ahead know her swift teammate would be able to outrun the Bulldog defenders for the ball. Smith beat two Monrovia players to earn a one-on-one try with the Monrovia goalkeeper.

She stuttered with the ball then ripped a shot to her right past the diving resistance and into the back of the net.

Monrovia had a few chances to even the game in the final 35 minutes, but the Greencastle defense and sophomore keeper Amelia Smith kept the Bulldogs on a leash. It was the final WCC game of the year for the Tiger Cubs and it locked GHS into second place.

Greencastle's only conference loss was to Cascade on Sept. 14

"We made a good run in conference this year," Grivas said. "It bodes well for next year."

The Tiger Cubs started the game by unveiling a new lineup. Senior defender Brittany Friars was in the game as a midfielder, with the goal being to add a little more urgency on the attack.

Friars found out about the change when she took the field prior to Monday's game.

"We're still trying to find the best combination," Grivas said. "Brittany has been playing really well the past couple days in practice. ... That's a testament to Brittany's skill as a player."

Friars didn't register a point, but she played with poise and physicality that made the Bulldogs uncomfortable.

Monrovia senior Anna Saucerman put her team on the board first, sneaking a shot to the top, right corner of the net with 8:20 left in the first half, but Greencastle responded immediately.

Junior Sydney Secrest leveled the score less than two minutes later and Greencastle controlled play for the final six minutes of the first half.

Smith charged hard toward the net and got her shot off with two seconds remaining, but Monrovia's goalkeeper knocked it away as the silent buzzer sounded.

It was the third win in a row for the Tiger Cubs, including a 2-1 victory at Sullivan on Saturday. The Golden Arrows game was the best GHS has played all year, Grivas said.

Greencastle is off until Thursday when the team hosts Edgewood at 5:30 p.m.