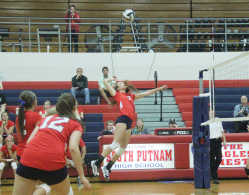 South Putnam senior Carey Tanner goes up for an attack during a match earlier this season. (Banner Graphic/GRANT WIEMAN)

MONTEZUMA -- The South Putnam volleyball team responded from a first-round lost to the hosts to finish the Riverton Parke Invitational in second place on Saturday.

The Eagles won three-set matches against Broad Ripple and Eminence.

The senior-laden roster got help at the net from sophomore Katie Hewitt and junior Emily Dobson to help lead the team's defense.

Seniors Aubrey Nichols, Katie McHugh and Carey Tanner were the leading servers for the Eagles and Kelly Hayden led them in digs.

The Eagles were knocked out in two sets by Riverton Parke, 25-6, 25-20, before waking up against Broad Ripple.