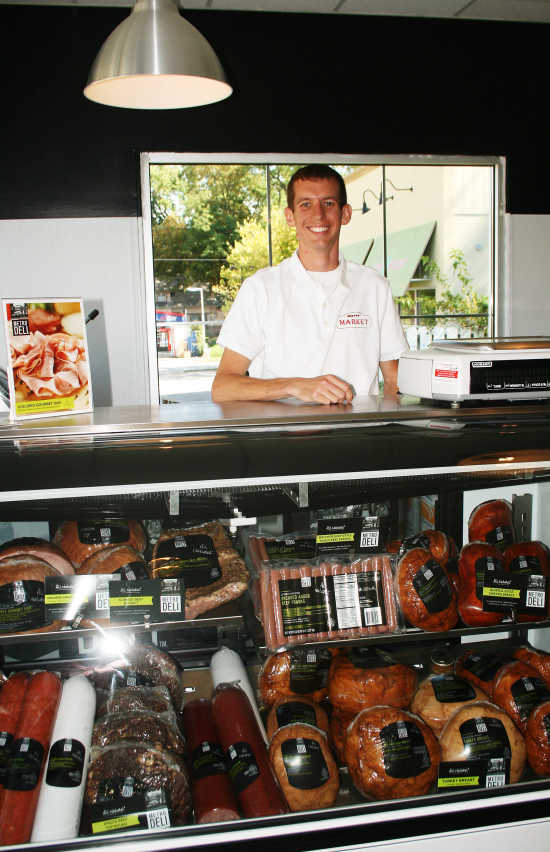 Young Greencastle entrepreneur Mitch Myers is all smiles behind the meat case at his new Myers' Market undertaking, now open for business at 302 E. Washington St.

As a community, Greencastle has long prided itself on being able to look to the future while embracing the past.

And the same can be said of the latest business venture now open just a couple blocks east of the historic courthouse square that defines the city.

Myers' Market -- a deli, butcher shop and sandwich place all rolled into one -- is the brainchild of Mitch Myers, a 2004 Greencastle High School alum and one of the first graduates of the Ivy Tech Greencastle Business and Entrepreneurial Services Center's Opportunity Knocks series of seminars.

The son of Jon and Ruth Myers, he can literally stand behind the meat case and spot the house he grew up in just a few paces away on the north side of the road where Bloomington Street meets Washington Street.

And being in the neighborhood is not insignificant in Myers' vision.

"I never would have expected opening a business to begin with," he said, "so it's funny it's in the same neighborhood where I grew up."

"Gould's Market is what we're being compared to most," he said of the old South Jackson Street business that disappeared sometime in the 1990s. "Gould's, Stop 'n' Shop and A&P, those are the three we always seem to get compared to."

Like Gould's and the others, Myers' Market will offer fresh cuts of meat (roasts, steaks, etc.), along with 14 different lunch meats (premium, all-natural deli items containing less than six ingredients) and made-to-order sandwiches.

In fact, by utilizing the entire DePauw University-owned building that sprang to life decades ago as a Pure Oil gasoline station with its distinctive high-pitched blue tile roof, Myers has been able to put two tables in the west room to accommodate the lunch crowd. He is also maintaining the outdoor tables that have existed through the Maggie's Deli and Blue Door Cafť tenures at the location.

Myers opened his store without fanfare on Saturday and is now primed for regular business. Hours are 10 a.m.-8 p.m. Monday through Friday and 7 a.m.-6 p.m. Saturday. 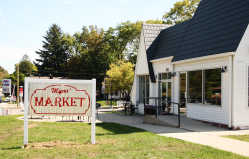 Myers' Market is located in the historic Pure Oil station building that most recently housed the Blue Door cafť at 302 E. Washington St. in Greencastle. Besides the Pure station, operated in the 1960s and beyond by Herb Craver, the building was also the one-time home of Sherm's Realty run by Sherm McKee.

A grand opening is planned for Friday, Oct. 4 with samples of gourmet products, deli meats and Indiana apple cider and locally made sauces. Myers also plans to grill some burgers and offer bacon-wrapped mushrooms at the celebration.

Bacon, incidentally, will be a staple of the shop, which Myers likes to call a "meal market" rather than a meat market because customers will be able to pick up produce and the fixings for an entire meal.

A specialty of the house, he said, will be what Myers is calling "52 weeks of bacon," with something new wrapped or stuffed with bacon to be featured each week.

The market idea is something Myers has nurtured since attending Blackhawk College in Kewanee, Ill., where he studied agricultural products and management and returned to Putnam County to work for the state-of-the-art hog operation of Mark and Phyllis Legan for seven years.

That experience is another reason he plans to feature products from local farms and producers and let customers know where the meat or produce originated.

Assistance from not only the Ivy Tech "Opportunity Knocks" series but the resources of the Indiana Small Business Development Center has proven "invaluable," Myers said, in his project going from idea to inception.

An internship at an old-time butcher shop in Illinois also stuck with Myers as he mused about his future.

"I absolutely fell in love with the atmosphere of the old-time butcher shop," he said. "It is something I would patron even if it were anybody else's. I really like the feel of it ... the closeness."

Myers said he is open to requests as he caters to his customers' needs like the neighborhood grocers before him.

Next spring he looks to add custom brat-wursts to his lineup, planning to create specialty brats in-house.

"I've got a lot of ideas," Myers added. "I just wanted to start out small and slow and then begin rolling out some of the ideas I have."