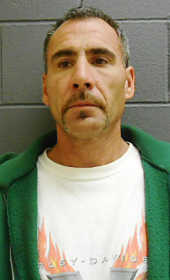 CORY -- A 49-year-old Clay County man is accused of eight separate charges, ranging from possession of pipe bombs to cultivating and possessing marijuana, following his arrest this week.

Facing five felony counts, Steven A. Smith, of Cory, was taken into custody about 11 a.m. Monday by Indiana State Police officers from the Putnamville Post.

He was lodged in the Clay County Jail at Brazil, authorities announced Wednesday, on the following charges:

-- Cultivating marijuana (more than 30 grams), a Class D felony, punishable by six months to three years in prison and a fine of up to $10,000.

-- Invasion of privacy (violating a no-contact order), a misdemeanor.

-- Illegal possession/taking a deer out of season, a misdemeanor.

-- Hunting with an illegal weapon or ammunition, a misdemeanor.

Indiana State Police officers executed a search warrant for the residence and property at 1470 S. CR 425 West, near Cory in southwest Clay County.

During a search of the property, Putnamville officers found items commonly used in the cultivation of marijuana, along with approximately 140 grams of suspected marijuana.

Troopers also recovered five homemade plastic pipe bombs (approximately two feet in length and three inches in diameter) and a "cricket," which is an explosive device made from a CO2 cartridge, along with multiple rounds of ammunition, nine rifles, six pistols and two shotguns.

A stolen Polaris all-terrain vehicle and a harvested deer allegedly taken out of season were also confiscated at the scene.

The investigation unfolded after troopers conducted a flyover of the property and located 10 marijuana plants.

Further investigation revealed the suspect had a no-contact order against him in place from Vigo County. The no-contact order prohibits Smith from possessing firearms, deadly weapons or ammunition.

The harvested deer was confiscated by Indiana Conservation officers for their investigation into wildlife violations.

The case was investigated by ISP Sgt. Jared Nicoson.