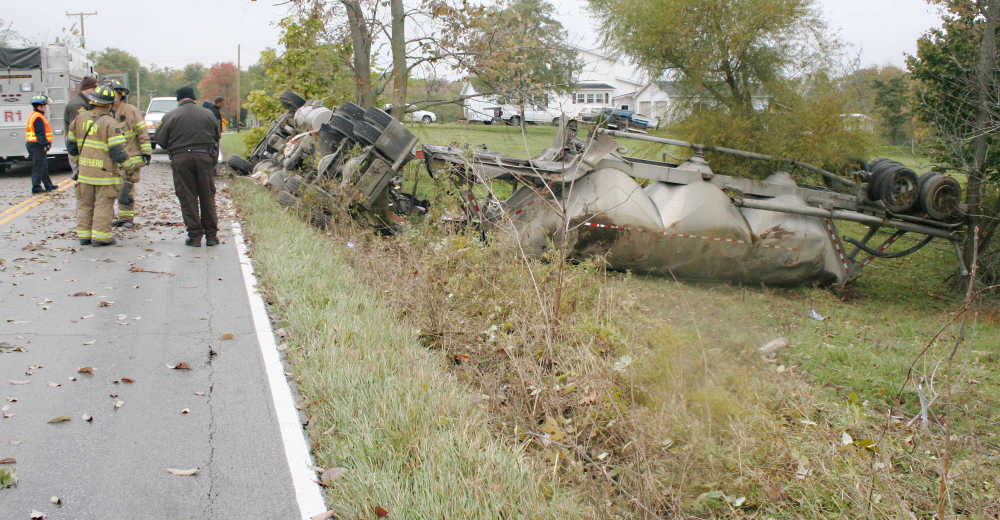 The recovery effort took more than five hours, but crews were able to pull a loaded, overturned tanker trailer from a pasture southwest of Greencastle on Thursday afternoon. The driver of the semi tractor, Ryan Thomas of Terre Haute, was taken to Methodist Hospital with serious head injuries following the accident.

A semi accident late Thursday morning closed Manhattan Road for more than five hours and sent a Terre Haute man to the hospital with serious injuries.

At 11:31 a.m., emergency personnel were dispatched to an overturned tractor-trailer on Manhattan Road northeast of Antioch Baptist Church.

Responders arrived to find the tractor overturned off the northwest side of the road against a tree, with the tanker trailer on its top at a 90-degree angle to the road and the tractor.

Thomas was freed from the wreckage and taken to Putnam County Hospital with serious head injuries. He was later airlifted to Methodist Hospital in Indianapolis.

Thomas, driving a truck owned by NAT Trucking of Terre Haute, had just departed Buzzi Unicem with a full load of cement.

A witness who was following Thomas told Putnam County Sheriff's deputies Col. Tom Helmer and T.J. Smith that the wheels of the cab got off the northwest side of the road.

With no shoulder along the side of the road, the rig continued off the edge of the pavement and into the ditch for about 300 feet until the ditch gave way to an embankment.

As the truck rolled onto its side and top, the cab struck a tree, which stopped the cab. However, the trailer's momentum rotated it in a counterclockwise direction until it came to rest upside-down, perpendicular to the road, against a pair of trees on the property of Rick Deer.

Officers said slick conditions at the time could have contributed to the accident.

With the truck in such a strange position relative to the road, responders spent much of the afternoon cleaning up the scene. Crews from Curtis Towing in Little Point led the recovery effort, which involved retrieving the tractor and its debris before setting to work on the loaded tanker.

Utilizing a pair of semi wreckers, the Curtis crew slowly got the trailer back on its wheels before pulling it back onto the roadway, still fully loaded with cement.

Altogether, the tractor and loaded trailer reportedly weighed in the neighborhood of 79,000 pounds. 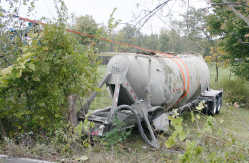 Manhattan Road was closed between Limedale and County Road 300 West until after 4:30 p.m.