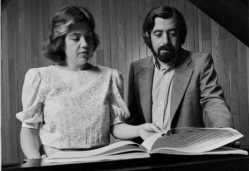 Claude Cymerman will give the third of four farewell retirement concerts with Lorna Griffitt in Kresge Auditorium at the DePauw University Green Center for the Performing Arts at 7:30 p.m. Wednesday. The two pianists, shown together in 1986, were faculty members at DPU School of Music.

The third of four farewell concerts celebrating Claude Cymerman's final year of teaching at DePauw University will take place on Wednesday, Oct. 30 at 7:30 p.m. in the Green Center's Kresge Auditorium on the DePauw campus.

A performance of Igor Stravinsky's piano four-hand version of "The Rite of Spring" will mark both the 100th anniversary of the work and the retirement of the School of Music's beloved French-born professor of piano, who has taught at DePauw University for more than 40 years.

Prof. Cymerman will be joined on this farewell concert, "100 Years After the Riot at The Rite of Spring," by guest pianist Lorna Griffitt. Introductory commentary will be provided by music history professor Matthew Balensuela.

When Stravinsky's ballet "The Rite of Spring" was premiered on May 29, 1913 by the Ballet Russe de Monte Carlo, the music and the radical choreography by Nijinsky were so controversial that the audience broke out in fistfights. The piano versions of the work precede the famous riot by a year and the history of these versions and the first recordings of them provide a framework for understanding The Rite's place as a landmark of modernism.

"Just as Stravinsky began work on The Rite of Spring, the player piano and 78 rpm recording had become viable technologies for hearing music in the home," Balensuela explained.

"Stravinsky was eager to take advantage of these new markets, even though the musical results were often uneven at best. He used the four-hand arrangement to produce a version for player piano (or pianola) and recorded the orchestral version onto a set of 78s before the advent of sound editing techniques. Although the results of both the pianola version and first recording are less than totally satisfying artistically, the rush to embrace the new technology and new economies of the early 20th century make Stravinsky as modern as his compositions."

The four-hand version of the composition to be performed in Kresge Auditorium is the original, written by Stravinsky himself and premiered by Stravinsky and Claude Debussy. For Wednsday's concert, pianist and former DePauw School of Music faculty member Lorna Griffit returns to Greencastle to join Cymerman on the commemorative performance of "The Rite of Spring for Two Pianos."

"Since a young age, I liked the sound of the symphony orchestra and the opera, and I tried to imitate it on the piano," Cymerman recalled. "It is amazing what you can do with this instrument."

After 55 years as a concert pianist and educator, he is still amazed. "I'm glad I didn't choose another instrument," the keyboard professor concludes.

For his fourth and final farewell concert, Cymerman will perform a new arrangement of Gershwin's "Rhapsody in Blue" with the DePauw Wind Ensemble at 3 p.m. Sunday, Nov. 24.

Individual tickets for this Faculty Select Series performance and all concerts are available online and at the Green Center box office; tickets for all students, seniors over 65, and youth, 12 years and younger, are free thanks to season sponsors Judson and Joyce Green.

For assistance with obtaining tickets, visit www.depauw.edu/music/tickets or call the GCPA box office, 658-4827.