Quick Wiedictions after the DPU exhibition loss at Butler 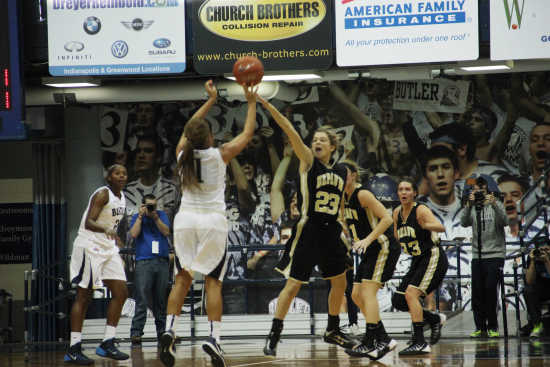 DePauw freshman Claire Ryan (23) closes out on a shooter late in the first half of the exhibition game at Butler on Sunday. Ryan's defense earned her important minutes during her collegiate debut for the Tigers. (Banner Graphic/GRANT WIEMAN)

INDIANAPOLIS -- The DePauw women's basketball team lost in an exhibition game at Butler on Sunday, 63-41 but it was not a real game, so I won't write a real game story. I was even told not to keep real stats of Butler because the Bulldogs want to keep their team a secret. I kept stats anyway, but they're hidden.

Instead of a story, here's a special edition of Grabservations:

1) DePauw is going to be really, really good again.

They had a hard time getting into the paint and Butler wouldn't give them any open looks from three, but the team still tied the game at 29-all early in the second half before succumbing to the Division I opponent.

2) Savannah Trees will lead the team in points by at least four per game.

She was second last season, but this year, with senior Alex Gasaway working her way back from a knee injury and playing fewer minutes, Trees will have very little competition to be the top scorer. Trees will have the ball in her hands a lot. She's starting at point guard (at least for now, see prediction 9) and while there will be many lopsided scores when she plays limited minutes, she should have plenty of time to get 14-15 per game.

3) Senior Alison Stephens will be second in points per game.

She led the team in minutes and was second in points on Sunday, but it's her aggressiveness on the offensive glass and outside shooting that will help her scoring continue.

4) DPU will have more turnovers than assists this season.

It was reasonably close last year, with 479 assists and 415 turnovers, but the Tigers struggled badly with their ball control on Sunday. Butler is much quicker and better defensively than anyone else DPU will play this year, so the bad passes should disappear. The assists might not come up. DePauw has several talented scorers but most of the shots come on pull-ups rather than catch-and-shoot attempts that generate assists. Trees led the team Sunday with three, including an exceptional one-hander on fast break to senior Ali Ross.

I'm doubling-up on my predictions for her because she had a double-double against Butler with 10 points and 10 rebounds. The DPU front court is a bit short on experience this year and Stephens is a beast on the glass. Plus her philosophy on the sport is practically basketball enlightenment.

"The only goals that I usually have are run and board," Stephens said. "That's the mentality I have. Run and board. ... I went with the same mindset I always do. Work really hard, get rebounds and the points will come."

6) DePauw will outrebound its opponent in every game this season.

This streak started Sunday when the Tigers beat Butler on the glass, 37-36. It won't stop this season.

7) The Tigers are going to get a lot better, probably before next Sunday's exhibition against Transylvania College.

The team has less than two weeks of practice, but the freshmen have already mastered the four-corner weave passing crossing scramble warmup drill, which is somehow harder to figure out than to describe. They've been sloppy in other aspects, and that carried over to the game on Sunday, DPU coach Kris Huffman said, but now the players have tape to reinforce what their Hall of Fame coach tells them.

"There were lots of areas today that have shown up in practice, and now we get to show them on film against an opponent who exploits them even more," Huffman said. "Deny ball reversal, fronting post defense, taking care of the ball, talking in every phase of the game. The great thing is we get to learn from this and practice."

8) There will be slightly more zone defense this year.

The Tigers are a man-to-man team, but with the struggles they had defending the interior against Butler, specifically preventing passes to the post, they experimented briefly with a 2-3 zone. DePauw won't play many teams that are bigger and better at the pivot, but there will be some.

9) Freshman Claire Ryan will start at least one game, and she will play some minutes at point guard. She played for Marist High School in Chicago, a city power, and Huffman talked about her ability to defense last week. She played the final few minutes of the first half against Butler, locking in on defense and crashing the boards. Mostly, in what seems like a vote of confidence for the coaches, Ryan wears No. 23, owned last season by four-year starting point guard Kate Walker.

10) DePauw will lose its first NCAC game. After two years in the league, the Tigers are undefeated in the conference and have won two NCAC tournament championships. They'll win the tournament again this year, and finish in first during the regular season, but they'll be 15-1 against NCAC opponents.