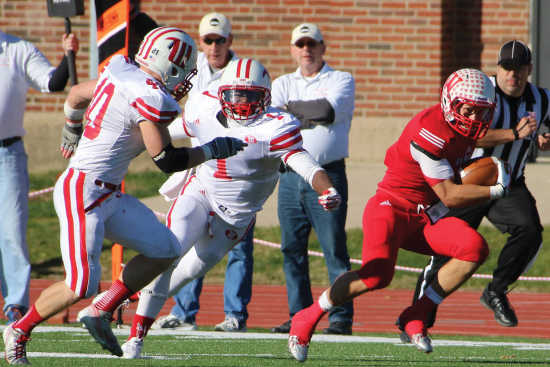 Houston Hodges attempts to get some yards after a catch in last Saturday's 35-17 loss to Wittenberg. (Courtesy photo/Journal Review)
Order this photo

CRAWFORDSVILLE -- Saturday continues one of the longest rivalries in college sports when the Wabash football team travels to Greencastle to face DePauw in the 120th Monon Bell Classic. 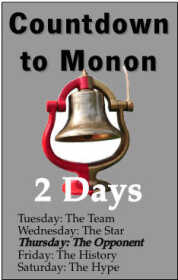 The Little Giants will look to win its fifth straight over the Tigers. Wabash holds a 57-53-9 series lead and a 38-37-9 lead since the Monon Bell was added to the rivalry in 1932.

But the Little Giants are looking for more than just a win against their rival; they're looking for a playoff spot in the Division III Football Tournament.

Wabash (8-1, 7-1) missed out on automatic bid last week after failing to secure the NCAC season title in a 35-17 loss to Wittenberg.

"You never want to be in this situation where you're relying on some committee," Wabash coach Erik Raeburn said. "The surest, safest way is to win the conference and get the automatic qualifier; well, we didn't that so now we're at the mercy of the selection committee."

Luckily for the Wabash there are only three undefeated teams left in their North Region: Mount Union, North Central and John Carroll. With Wittenberg claiming the conference title and Illinois Wesleyan as the only other one loss team, the Little Giants, with a win against DePauw, could be seeded from sixth to eighth or be totally excluded.

"If we lose on Saturday there is zero chance on going," Raeburn said. "If we win I guess I would be disappointed if the committee didn't select us."

Wabash is trying to right the ship after last week's loss in which they saw a running game accumulate just 57 yards and a special teams unit that failed to do its job.

"Obviously, they're disappointed and hanging their heads a bit," Raeburn said. "Anytime you lose a game it's disappointing.

"Most 18-22 year old guys are pretty resilient, so hopefully they'll shake it off and start to bounce back and finish the week of practice strong."

And what better way to get back on track than against their long, storied rival in DePauw (4-5, 4-4).

"If we were playing somebody else it would be a real challenge to get refocused and get up emotionally for the game after a disappointing loss," Raeburn said. "But the rivalry, the history of the Bell Game, everything at stake, that should help to being able to get the focus back."

The Little Giants will look to shore up the offensive line this week in practice to help get the running game back on track. Raeburn also wants to obtain a lead early so they play the way they want.

"I think the biggest thing is we cannot afford to fall behind," he said. "That was part of the reason why we weren't successful running the football. We had to give up on the run and start passing trying to get back in the game after falling behind."

Quarterback Michael Putko threw a season-high 50 passes last Saturday. So far this season, he has thrown for 1,406 yards and 11 touchdowns.

Freshman Drake Christen stepped in to fill the void Saturday and had his best game of the season with 9 catches for 108 yards and a touchdown. Christen is expected to be used again often at least early on.

"Drake, he's got to play for us," Raeburn said. "Really happy with how he played last week. Not being able to have Houston available for the first half, that will hurt us, and we'll rely on those other receivers to step up in his absence."

As for DePauw, Raeburn knows they're playing the best football. After starting the season 0-4, the Tigers have won four of their last five. One key to their success has been the insertion of freshman quarterback Matt Hunt.

"They're playing their best right now," Raeburn said. "I wish we would have played them the first game of the season; I would've liked our chances a lot better. The quarterback's settled in and doing a great job."

Tickets for the Wabash side of Blackstick Stadium have sold out.