Dixie Chopper fully intends to call back workers by early 2014

FILLMORE -- Reluctantly, Dixie Chopper has temporarily laid off some of its employees as of Monday.

"The decision was not an easy decision but it was necessary for the continued success of the company," Chief Financial Officer (CFO) Bradley M. Craig said in a prepared statement provided to the Banner Graphic.

"The doors at Dixie Chopper are open and will remain open," he added.

Dixie Chopper has every intention of calling back as many of the affected employees during the beginning of 2014, company officials said 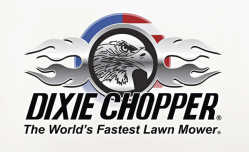 Specific numbers laid off were not disclosed.

The layoffs have come as the Dixie Chopper management team, which was put in place back in June, is reorganizing the company "to ensure a strong financial position in the marketplace, optimal production levels, reduced overhead costs, and a streamlined shipping process."

The new management team is composed of company founder Art Evans as chairman of the board, Wes Evans as president and chief executive officer (CEO), Jeff Haltom as vice president, Bradley Craig as CFO and Greg Fernandez as vice president of administration.

Company founder Art Evans, who built the first of Dixie Chopper's zero-turning-radius lawnmowers in an old dairy barn on his parents' property north of Fillmore in 1980, is delighted to let everyone know that the "city slickers are out of town" and that the company is "getting back to its roots."

Those roots run deep locally and include producing commercial and residential zero-turn mowers designed to outlast the competition.

To date, every Dixie Chopper mower ever built has been assembled in Putnam County -- either at the longtime factory outside Fillmore or for a short time in the former Mallory plant in Greencastle that was razed in April 2011, two years after production was transferred back to Fillmore from that facility.

Meanwhile, in related news, Dixie Chopper has announced the release of a new stand-on mower, The Stryker, which was recently unveiled at the Green Industry Expo (GIE) show in Louisville, Ky.

The Stryker stand-on received a lot of attention for its durability and state-of-the-"Art" handling.

Dixie Chopper plans to begin production on The Stryker stand-on in early spring as the homegrown Putnam County company focuses on continuing to bring new, innovative ideas to the marketplace.