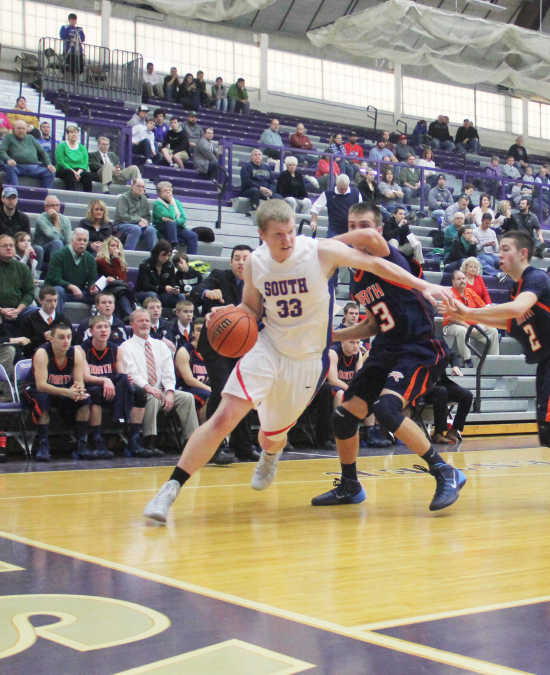 Trey Moore, 18, was born on Sept. 25, 1995 to Bob and Jenny Moore and is a student-athlete at South Putnam High School. He has three siblings, Emma, Kiersten and Nate Moore.
His says his favorite food is anything: "I'm a big guy; I like any type of food." In school, Moore says his favorite class is psychology and his favorite teacher is Mr. Mathew Steward. His favorite sport to watch is football and his favorite athlete is Josh McRoberts.
In his free time he likes to hang out with friends, play NBA 2k14, go to the movies and snowboard. He likes to listen to rap and rock music and his favorite movie is "The Express: The Ernie Davis Story."
Moore was named All-County and All-Conference in both his sophomore and junior years. He participates in Fellowship of Christian Athletes and lettered in tennis in his junior and senior years and in basketball his sophomore and junior season.

Banner Graphic: What is your favorite sport to participate in? Why?
Trey Moore: I love basketball and everything about it. But my favorite sport to play has always been football. I had planned on also playing football when I moved to South Putnam but my knee injury that I had sophomore year hindered me from doing that. There is just something about being able to put on those helmets and go out and hit someone.

BG: How much of an effect have your teammates had on you?
TM: My teammates have had a huge impact on me. Not only as an athlete but also as a person, they help me to push myself. When I think of slacking off they remind me that I cannot do that. They push me in basketball but also in school and I owe them a lot of credit.

BG: What is your fondest memory of playing sports?
TM: Two of my favorite memories of playing basketball at South Putnam both happen to deal with my cousin Justin Bumgardner and Seth Hammond. With Justin, it was a close game against Tri-West, I believe, during sophomore year. He yells frantically at me to pass him the ball and he shoots it at the wrong goal. The other is sophomore year when we played a very rough game against Tri-West. We were down most of the game and Seth Hammond hit a last second jumper to win us the game. Those are two of the most exciting moments I've ever been a part of.

BG: What is the biggest lesson that you have learned from playing sports?
TM: I have learned that teamwork is huge when it comes to success. Another big lesson I have learned is hard work always pays off in the end.

BG: Who has had the biggest influence on you in your sports career?
TM: I had two really big influences in my sports career. The first one is my very first basketball coach Brent Battin. He taught me so much when it comes to basketball. I owe him a big thanks. The other really big influence I have had is my dad. He has always been there to help me with basketball. I can remember he would always go out with me to the gravel where my goal was and make me shoot and do layups. He is a big reason why I have had success. I owe a lot of my success to him.

BG: What are your team and individual goals for basketball this year?
TM: My biggest individual goal is to improve for my team. On top of that I would like to make all-conference. As a team our biggest goal is to improve each day and with each practice. If we do that our biggest goal would be what every team goal is, to win a sectional championship.

BG: Why do you wear the number 33?
TM: I have always loved the number 33 because Larry Bird wore it. He is one of the greatest to ever play the game.

BG: What are your plans for after high school?
TM: I am going to Indiana State to major in either education or some branch of psychology. I'll probably get married and have a family later on down the line.