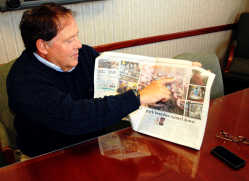 Holding a copy of the London Evening Standard, Gary Lemon points out where he and wife Susan were sitting when the roof of the Apollo Theatre in London collapsed in a Dec.19 incident that injured the Lemons and 77 other theatergoers, including nine seriously.

As regular as those famed Capistrano-returning swallows, DePauw University Professor Gary Lemon has come back to campus following another fun-in-the-sun Winter Term, all nice and tan and full of tales to delightfully and demonstratively tell to all who will listen.

Only this time, the story he has to share doesn't involve a scuba-diving trip to Bonaire or Cozumel with a group of excited college students who got to swim in the ocean with dolphins.

Instead, it is the story of how he and wife Susan were caught in the middle of an incident that made international headlines and sent them to a London hospital.

Prior to departing for his annual Winter Term sojourn to The Caribbean, Lemon and wife Susan took an earlier trip to London where Gary was checking on the progress of a DePauw intern. While in London, the Greencastle couple decided to see the play "The Curious Incident of the Dog in the Night-Time," a choice that came highly recommended by fellow travelers and members of the DePauw faculty.

"We had some trouble getting tickets," Lemon began, adding that he spent hours working on making arrangements before securing a choice pair of seats seven rows back from the stage on the center aisle.

The Lemons were enjoying the play, he said, explaining that a young boy is central to the plot because he's wrongly accused of killing a dog and sets out to try to find the real culprit.

Lemon said he was caught up in the nuances of the play and was running through scenarios about the real dog killer when the actress playing the boy's dead mother appeared in the aisle near their seats.

"She walked up from the back of the theater," he recalled, "and she's supposed to be in the ocean and she's trying to get him (the boy) to come in (the water with her)."

That's when Lemon thought the producers were perhaps taking things a bit far. Thinking they were attempting some kind of realistic experience of the Sense-a-Round meets Blue Man Group mode, he remembers feeling like he was being shoved forward.

"The boy is pointing toward the ceiling," Lemon said, "and I think it's all part of the play. I really thought maybe we were going to be hit by water, and I remember thinking, 'This is a little over the top.'

"But within a second, we knew it wasn't part of the play."

Instead of water, it was dust, chucks of ceiling plaster, pieces of wooden framing and other debris that came raining down from four stories up onto the sold-out audience.

It had been raining -- "Isn't it always in London?" Lemon interjected -- and the roof of the 103-year-old theater apparently collapsed under the weight of the rainwater that collected there.

The lights went out and Lemon said they could hardly breathe because of the suffocating dust that enveloped them.

"My initial reaction," he said, "was that someone had planted a car bomb outside the theater and it had blown in. I wanted to get out of there before people started coming in with guns."

Through the dust he looked toward wife Susan, who had asked him, "What just happened?"

And as Lemon turned toward her to answer, he saw blood "literally coming all the way down her face on both sides of her cheeks."

Fortunately their seats were near an exit, so they headed that direction and worked their way two floors up to street level.

"There was no pushing or shoving or yelling or screaming," Lemon said, noting that within two or three minutes police and paramedics arrived on the scene and started separating out "the walking wounded."

Wife Susan was certainly among those needing medical attention and several stitches, and suddenly Gary found himself in that group as well.

He remembers saying he started having neck pain and almost immediately found himself being strapped down, looking at the ceiling and heading for an ambulance and a 30-minute ride through a London traffic jam to the nearest hospital.

"They wheeled me down a hall and there must have been 50 people down each side of it," he recalled. "And for the next hour seven or eight people were all around me."

However, the Lemons had nothing but praise for the British medical community.

"The people we dealt with couldn't have been nicer," he said. "I had two X-rays and a CAT scan and they never even asked me for my insurance card or any kind of payment. They just took care of it.

But in getting all the treatment he needed, doctors and interns found it necessary to cut Lemon's clothes -- including a new pair of nice pants -- off of him due the possible nature of a neck injury.

"Now it's 1 o'clock in the morning," he laughed, "and I have no clothes. I convinced them to at least give me some scrubs to wear to go back to the hotel."

Meanwhile, wife Susan was off in another area of the hospital getting seven or eight stitches as Gary was supposed to sit quietly for two hours to ensure he was indeed fine. Within an hour they were reunited, however, and he convinced the nursing staff to call them a cab.

"It's now 2 a.m., and I'm in London and have no idea where we are. We're dirty and I've got on scrubs that don't really fit and Susan's face is all black. We look awful."

But the cabbie gets them back to their charmingly small hotel, all the while kindly pointing out sights of London that the Lemons really have no interest in at this point.

Uncertain about the couple on his doorstep, the proprietor finally lets them in and gives them the key to Room 5 when Gary tells him, "We were in the Apollo."

Obviously, the Lemons never got to see how the play ended. Susan, however, did buy the book and has finished reading it.

"So Susan now knows who killed the dog, but I don't," Gary laughed.

After resting in their hotel room all the following day, a Friday, the Lemons flew back home on Saturday and mustered up enough strength to attend the Indiana Pacers-Boston Celtics game that Sunday in order to see former student Brad Stevens (now the Celtics' coach).

"It's a story I can tell," Lemon smiled in retrospect. "I was there. I was close. I've told it more than once.