Eagles' Shaffer third in regional, on to semi-state 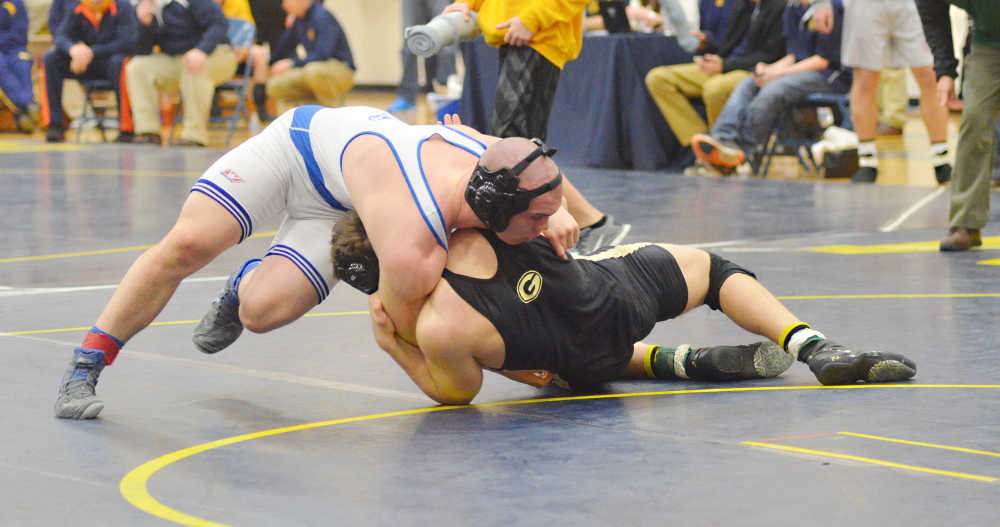 With a third-place finish at 195 pounds in the Saturday Mooresville Regional, South Putnam freshman Kyle Shaffer (left) is on to the Evansville Reitz semi-state. (Banner Graphic/JARED JERNAGAN)

Season ends for other regional grapplers

MOORESVILLE -- Fifteen Putnam County wrestlers were whittled down to one as South Putnam's Kyle Shaffer left as the sole advancer at the IHSAA regional wrestling round at Mooresville High School Saturday.

Shaffer defeated Greenwood's Anthony Miller 10-9 in the opening round before falling to Avon's Evan Elmore in the semifinal round 8-6.

The 195-pound Eagle wrestler took third place after defeating Brownsburg's Stone Neese, whom Shaffer lost to in the sectional last week, 5-3 in overtime.

South Putnam head coach Josh Hendrickson said Shaffer's matches were the kind of efforts that proved he belonged at the semi-state next week.

"Kyle's match with Elmore in the semifinal was probably the best match he's wrestled all year," Hendrickson said. "He didn't come up with the win but Elmore is a very skilled wrestler. To get redemption from last week against Neese was good for him."

Shaffer's afternoon was as good as it got for the Putnam County schools, however, as the other 14 wrestlers were knocked out in first-round action.

South Putnam lost one wrestler before the meet ever began when Jacob Williams was ruled out due to injury and was replaced by Cloverdale's Brayden White.

Hendrickson added that the little things didn't go the Eagles' way for the most part.

"We knew coming in we had five guys with Jacob not being able to wrestle and they were all tough matches," Hendrickson said. "They were matches that could have gone either way but today, they didn't go our way."

Greencastle, Cloverdale and North Putnam all had similar stories to tell on the day.

Ryley Cook followed Vittetow out at 106 pounds after being eliminated by Franklin's Trevor Reece. Trae Carrington was the second Tiger Cub eliminated in a tough 7-4 decision to Center Grove's Nick Spencer.

Tiger Cub head coach Logan Kuhne said that while the four wrestlers all suffered setbacks, the experience would be important for the following season.

"We've got some bright spots for next year," Kuhne said. "Ryley Cook had a really tough opponent. Franklin Community has the number one team in the state and anyone from that team is a tough opponent.

"Trae wrestled a tough match and put the kid on his back. He tried for more and got rolled, but both of those guys will be back next year. Mark also got the winner in his weight but he also returns next season.

"Any time you have guys coming back, it's good to have that leadership in the room because they've seen what it takes and can let others know what it takes to get to that level," Kuhne added.

"Trae and Ryley both have offseason plans and we look forward to what they and Mark can do next year."

Jacob Waycott, given one of the toughest draws of the day, gamely fought off Franklin's Skyler Lykins until a late pin in the third period.

Cody Stout fell to 182-pound runner-up Michael Petrole of Franklin while White fell to Connor Tolley of Franklin in the first period.

Cloverdale head coach Christian Frye said the efforts of the five wrestlers at Mooresville exemplified the determination the squad had over the course of a tumultuous season.

"Today was over too quick," Frye said. "But this is something we can build upon. We'll lose two guys to graduation but three return and they can be a building block for the squad.

"I think it's fantastic that we got five guys to the regional. It says a lot about their dedication because it's been a rough year. They stuck with it and wrestled their best at the end of the year."

Grant Bryan, North Putnam's lone representative, met the same fate as most others as he was eliminated by Martinsville's Ben Schoolcraft.

Cougar head coach Bucky Kramer said that the bump up in seeding presented a wrestler with an entirely different set of challenges to Bryan.

"Grant wrestled tough," Kramer said. "Schoolcraft it a long, tough kid with a lot of range. Grant did a nice job with some of the shot defense he worked on this week.

"Grant's a kid that, had he wrestled the last four years, would be better than he is now. He's worked hard this year and I'm proud of him and Ben Wiatt, who was the alternate at 195 pounds this week, and all the seniors we had this year."

Kramer added that the squad continues to grow and looked forward to having more faces at the regional next season.

"Last year the seniors had a good relationship with the underclassmen and we were able to have a full roster this year," Kramer said. "Next year, we want to continue to grow the program.

"Alan Aynes, who took sixth at heavyweight as a freshman, is someone we look at as a leader for next year. You hate throwing that on an underclassman, but he's going to work hard.

"Guys like Ethan Winings, David Attkisson and Trae Straziscar are guys who had good seasons for themselves and will grow and progress. We've also got a good crop of middle school kids coming through so we're excited about the future."

With wrestlebacks eliminated from the regional round this year, not everyone who lost Saturday is done in the tournament yet.

Cloverdale's Waycott, Warren and White, along with South Putnam's Vittetow, are all designated as alternates for their weight classes at the semi-state level.

The limelight, however, will be squarely on the shoulders of Shaffer and his opening-round matchup with No. 14 Andy Fisher of Southridge.

Hendrickson said that while there was a great deal of disappointment with the way the day unfolded, the squad would be back on Monday to keep working with Shaffer.

"It's an invaluable experience going down to Evansville," Hendrickson said. "You can't ask for more from a freshmen. Hopefully he can make the next step.

"There's a lot of guys that are talented and willing to come and help him. There's a lot of experience in the room. The seniors aren't going to semi-state but they've been there and seen what it's like.

"That should help Kyle a lot. He'll get the spotlight this week and that's great for him. He can only get better."