Jessica Lenihan scores on a putback late in the fourth quarter Tuesday at Danville. Of the junior's 10 points, none were more important than these, which tied a game at 42 after the Tiger Cubs had trailed by 14 points. Greencastle did not look back, winning 48-42. (Banner Graphic/JARED JERNAGAN)

DANVILLE -- The IHSAA girls' hoops sectionals kicked off Tuesday and the Tiger Cubs had a tough draw in Sectional 27 at Danville, taking on the host Warriors.

Greencastle (14-7 4-1 WCC) visited Danville (12-11 3-4 SAG) earlier in the year and lost 53-30. That was stuck in the back of their heads and with this being a win or go home situation, they were not going to back down easily. In the end they fought too hard for the Warriors to handle and pulled off a 48-42 come-from-behind win.

"We knew we had our work cut out for us," GHS coach Brad Key said, "They beat some really great teams this season including Western Boone and Cascade twice. We knew it was going to be a challenge but we knew we had the defense to do it. Our girls just really did a good job, and as a coach I couldn't be happier. I am just so proud of my team."

The Tiger Cubs were in no mood to go home and showed it throughout the game. With an exciting and persistent fourth quarter, they mounted an unlikely comeback.

The game was compelling for all four quarters. Greencastle came out and battled to start the game and played right with the Warriors.

They were down two at the end of one, but holding Danville to only three points in the second gave them a 25-21 halftime lead.

From the first half it looked as if Greencastle had the edge. The third quarter was different, as Danville played like it had in the regular season matchup.

After a first half of great ballhandling and getting good shots the Tiger Cubs tripled their turnover total and only scored four points in the third.

Greencastle's defense struggled and the Warriors took what they wanted. Danville scored 20 points in the quarter and at one point held a 14-point lead.

"I felt offensive we kind of got stagnant. I felt we didn't attack as much," Key said, "Once we found out to attack it was kind of in a do or die situation. We knew if we didn't we were going home. They bought into it and it feels great that we can practice tomorrow."

As the third quarter played out, it looked like the Tiger Cubs' season might be coming to an end, but they still had a chance to make a replica of the first half and they had eight minutes to do it.

On the very first play of the final quarter the Tiger Cubs got a steal and a layup to cut the lead to 10. That was already a good sign and it helped them gain a little momentum.

One bucket turned into two buckets and two buckets turned to three buckets for Greencastle. This was all in a timely situation and on a better note Danville had yet, to score.

Coach Key had told his team they were not out of it and they had to get one stop at a time between the third and fourth quarters.

With the lead cut to six, it was about time for the Warriors to do something. Sophomore Hannah Newby was fouled, but she only made 1-of-2 from the charity stripe.

That one point from Newby was all the team could muster for the entire quarter. But trailing by seven, Greencastle still had work to do.

Again, they began string buckets together, cutting the lead to four, then two.

With a little over a minute left GHS junior Jessica Lenihan got a big offensive board and put it back up to tie the game. 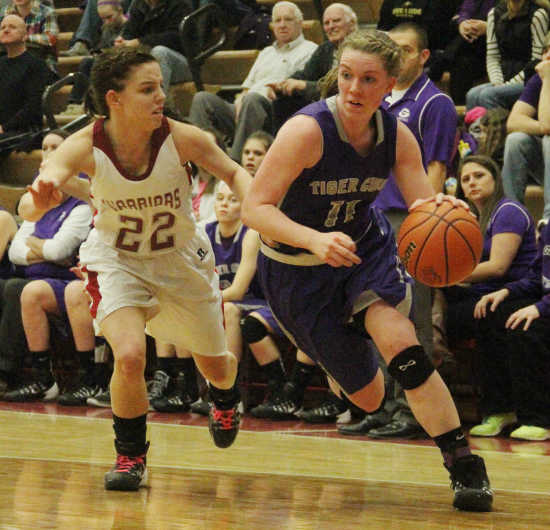 Tiger Cub junior Callan Taylor drives to the bucket against Nicki Kiefer of Danville. Taylor scored a game-high 14 points, including four free throws down the stretch to give Greencastle the lead and seal the victory. (Banner Graphic/JARED JERNAGAN)

One of the biggest contributors, GHS junior Callan Taylor was fouled with 45 seconds left and made two free throws to put her team up by two.

On the next Warrior possession Taylor got another steal and was fouled. This time she made 1-of-2 to make it a three-point Greencastle lead.

At the other end, it was Taylor coming up with possibly the the biggest rebound of the night. She was immediately fouled and made the second of two free throws, making it a two-possession game.

That all but sealed the game, but senior Alex Basile added to Danville's troubles by getting a steal with 15 seconds left and knocking down the final two heart-breaking free throws to make it 48-42.

Danville could do nothing but watch the season slip through its hands.

Both Basile and Taylor had exceptional games. The Warriors could not catch a break from Basile who deflected 15 balls and got 4 steals and 4 blocks.

Taylor broke them down on the offensive end and destroyed their attack. The passing between the two stars was precise.

"We had Basile with 15 deflections," Key said, "We talked about it at halftime that Danville was having to change things up because she wouldn't let them make passes. She's like 5 feet 4 inches. It's not like she's real tall and lengthy, yet, she can do that."

Key went on to say that the team chemistry is what they practice on and that he is really proud of the way the team responded. His whole team contributed in some way.

Greencastle will move on to face the Indian Creek Braves, who had a first round bye in the bracket. The game will be played Friday at 7:30 p.m

This game will be a rematch of last year's Danville regional matchup, which the Braves won 53-39.

"It is kind of going to be a rematch for us here in this same gym," Key said, "We held with them until the third quarter then lost it. We definitely look forward to a rematch." 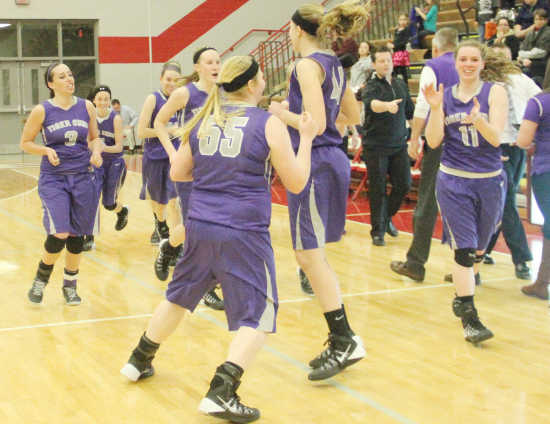