After 13 years, the two-building outlot development at the north edge of the Greencastle Walmart Supercenter property may be getting a fresh start and perhaps even a little good luck.

The site -- which over the years has housed a number of retail businesses, although never a restaurant -- is currently being marketed nationally as part of a 38-property court-ordered liquidation effort that began Tuesday. 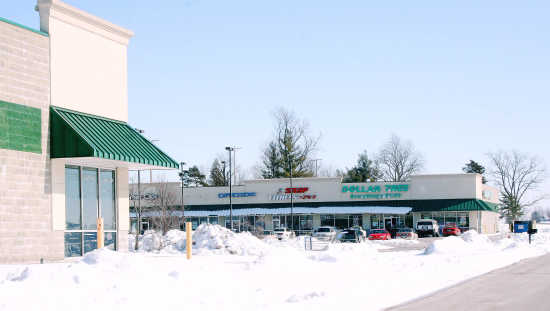 The 25,502-square-foot, two-building retail complex on the outlots in front of the Greencastle Walmart Supercenter is part of a 38-site package being marketed nationally for sale in a court-ordered property liquidation effort. Banner Graphic/ERIC BERNSEE

Allied Advisors LLC, as exclusive representative of the liquidating trustee, has commenced a national marketing process designed to maximize proceeds in the sale of the Silvercreek Retail Portfolio (also referred to as the Coldwater Portfolio).

Overall the portfolio contains a total of 610,691 square feet in 38 single-story, in-line retail properties. Of those, nearly 90 percent are shadow-anchored by a Walmart Supercenter.

"We are marketing the properties for sale," Allied Advisors Executive Managing Director Mary L. Carolan told the Banner Graphic. "We do not encourage any particular scenario -- restaurant or otherwise. We leave the leasing strategy open for a new owner to create value for themselves and the communities the property serves."

The affected properties, all built by a single developer, are located in 33 different cities across 17 states. The majority of the sites are concentrated in the Midwest with an average construction year of 2001.

The Greencastle property, which was built in 2001, is located at 1748-1752 Indianapolis Rd. The site consists of two facing retail buildings separated by a central parking area having 110 parking spaces.

One of the five largest properties by building square footage, the local site contains 25,502 square feet of retail space on 2.63 acres of land.

Current tenants of the property on Greencastle's East Side are all located within the eastern building. They are Great Clips, Dollar Tree and Snap Fitness.

The western building is presently vacant but formerly housed Fashion Bug on the south end and Hibbett Sports on the north side of the structure.

The U.S. Bankruptcy Court Northern District of Indiana, South Bend Division appointed a liquidating trustee to sell the portfolio in whole, or in part, to maximize value.

The portfolio overall is 74 percent leased with a weighted average scheduled net base rent of $9.80 per square foot, an average tenant tenure of 8.7 years, and an average remaining lease term of 32 months.

The key factor influencing the success of the properties is location. The 38 properties are located largely in secondary and tertiary Midwestern markets with limited competitive retail offerings, the marketing information notes.

Allied Advisors, based in Houston, is a boutique commercial real estate transaction firm specializing in the disposition and financing of office buildings in the Southeastern United States as well as retail and mixed-use real estate on a national basis.