Councilman Adam Cohen appeared to be lobbing a softball question in the direction of Brad Phillips, reluctantly stepping to the City Hall podium under the limited glare of cable-access channel TV lights.

After hearing Phillips detail how much salt has been used on city streets and how difficult it has been to keep salt and sand on hand this winter, Cohen fired off the logical follow-up question: "And how's your budget?"

If you could read their minds, the entire City Council had to be thinking, "Really?!?" 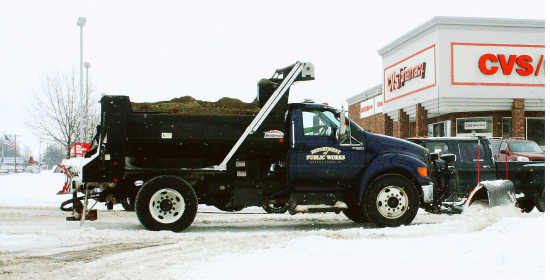 During one of the many recent snowstorms that have dumped more than 40 inches of snow on Greencastle this winter, a City of Greencastle snowplow clears an East Side intersection at Indianapolis Road and Percy Julian Drive. Banner Graphic/ERIC BERNSEE

After all, in other communities, the ravages of winter 2013-14 has sapped not only supplies and manpower but redlined the department budget as well. Television channels have been rife with reports of this community and that community running out of salt or running up enormous overtime hours.

"I was asking that question," Cohen later confided, "expecting to be getting glares from everyone up here at the table.

"When we had Brad up there and he said we were going to be all right, I thought, 'You've got to be kidding,'" the Council president added.

"We worked snow removal for 18 days (in January)," Phillips said.

Councilman Mark Hammer said he took note of one of the street crews on a recent snowy day, watching a snowplow stop for a stopsign and seeing its driver drop his head into his hands, exhibiting perhaps both the exhaustion of his labor and the frustration of a long winter.

In that process of battling the endless winter, city street crews used 301.8 tons of material, 1,226 gallons of gasoline, 483 gallons of diesel fuel to plow a collective total of 7,058 miles of city streets during January alone, Phillips reported.

Oh yeah, and they also had time to work in using three tons of cold mix asphalt to address a few major potholes while also installing two new stopsigns and three signs and poles. In addition, they even strung two banners across Washington Street, although neither reportedly proclaimed "Old Man Winter, please go home" or anything similar.

Phillips estimated his department has used $25,000 in street materials this winter to date, with approximately $20,000 of that being salt.

"We've still got salt on hand," the department head said, explaining he likes to use a salt-and-sand mix on city streets. "But we're still having trouble getting it (salt) like everyone else in Indiana."

While Phillips shunned credit for staying ahead of the battle against the snow and ice, Mayor Sue Murray noted that an Indianapolis TV station even showed up during the Feb. 4 snowstorm to film how a city like Greencastle responds relative to the snow-removal disaster widely documented in Atlanta.

So smart planning and a mild winter 2012-13 have helped make this winter more manageable.

But what about the aftermath, Cohen wanted to know. "Are we going to get hit with potholes?"

"Oh yeah," Phillips assured. "Then we're going to get hit with a meltdown and all the problems from that."

But for now, the City Council had nothing but praise for the department and Phillips' quiet leadership.

"You're the man, Brad," Councilman T.J. Smith remarked as Phillips left the podium, happy to settle back into his seat in the back of City Hall.